Just a month to wait for more affordable Big Navi, rumor has it 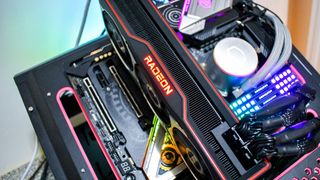 could arrive on March 18 according to the latest from the rumor mill regarding the supposedly inbound graphics card.

This comes from French tech site Cowcotland, which tweeted what it believes to be the launch date for AMD’s next Big Navi GPU (as reported by

Obviously take this with a sizable chunk of caution – Cowcotland is not the most reliable source we’ve ever encountered, shall we say – but as you may recall,

word on the GPU grapevine

was that this card would be out in March, so the middle of the month seems a pretty good bet anyway.

Backing this up is the

spotting of the RX 6700 XT being certified

by the Eurasian Economic Commission (EEC), a process which usually happens not long before a product is released.

The six different Gigabyte models of the 6700 XT registered with the EEC also showed that this graphics card will run with 12GB of video RAM, again as previously rumored. It’ll also purportedly have a 192-bit memory bus.

Furthermore, the RX 6700 XT is set to use 40 compute units and 2,560 stream processors, according to leaked spec details – but of course all this must be taken with an appropriate amount of skepticism.

Pricing should weigh in somewhere at under $500, we’ve heard, but given how stock shortages are going at the moment – and how scalpers are trying to make a killing on all new GPUs – the recommended price, and the price you may have to pay in the real world could be two quite different things (sadly).