Or at least a few models of the 3060 Ti, if leaks prove true 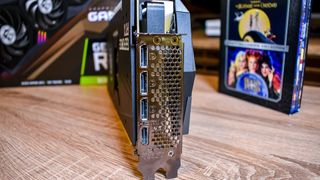 out later this week on February 25

, but we’ve just caught another glimpse of purported pricing – and it’s not great news on the affordability front.

It seems that RTX 3060 GPUs have arrived with retailers, unsurprisingly at this point, with Coreteks supplying images of a load of different boxed models at an unspecified US retail outlet (presumably one of the big players), all ready to go on sale – and doubtless be snapped up instantly.

The really interesting bit, however, is

also provides what it believes to be the retail prices for some of these graphics cards. Remembering that the recommended price is $329 (around £235, AU$420) in the US, the supposed actual prices at this one retailer will be as follows:

So, as you can see, the cheapest model is $485, a whopping 47% more than Nvidia’s recommended price. Huge pinches of salt are required, naturally, and we certainly can’t take this as anything other than a potential indication of possible price hikes. (Also note that the MSI Ventus X2 presumably refers to the Ventus 2X).

That said, sadly this fits with the price-related leakage we’ve seen in Europe as well, with retailers like

Which as you may realize, leaves us in the situation where the RTX 3060 will actually be more expensive than the recommended price of the 3060 Ti. Or indeed even the real-world price of some Ti models – you can get an EVGA 3060 Ti for $460 at Best Buy, for example, which is cheaper than any of the above 3060 prices (but naturally, that 3060 Ti is out of stock – as are all models).

due to the 192-bit memory interface

Stock problems have plagued Nvidia’s Ampere graphics card since their launch, and that situation is expected to continue with a stampede for the RTX 3060 – particularly given that this is the most affordable RTX 3000 card yet released (although as we’ve seen, affordable is a relative term here).

deliberately halving the hash rate of the RTX 3060

That should mean that these cards are much more likely to end up in the PCs of keen gamers, rather than mining rigs, hopefully easing some of the massive demand issues.

That’s a welcome move, of course, but demand is very likely to be huge from gamers alone, so there’ll need to be a seriously fast flowing supply of RTX 3060 models – which isn’t likely to happen given what

Nvidia and retailers have already said about production woes

The danger is that

is already being talked about and viewed as a kind of ‘lost GPU generation’; a great product that literally isn’t being delivered, or at least not in much quantity. Nvidia needs to ensure that this isn’t how the RTX 3000 range goes down in history, and as we recently discussed, Team Green should go further than its anti-mining measures – with one possibility being pushing the

release of refreshed ‘Super’ RTX 3000 cards sooner rather than later