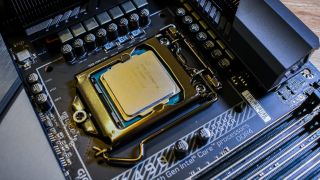 will be offered in a bundle with

, if the latest nugget from the CPU grapevine is on the money.

Prolific hardware leaker @momomo_us flagged this one on Twitter, having discovered what’s apparently a terms and conditions document from Intel relating to the purported Hitman 3 bundle.

As you can see, Rocket Lake processors are listed as qualifying hardware (amongst other chips, including Comet Lake products), with the date of the promotion running until June 30, 2021. As ever, exercise some caution here, as we can’t take it for granted that this leaked document is genuine.

That said, the promo makes sense in terms of Intel having previously said that it has worked with developer IO Interactive on optimizing for Hitman 3, and also used the game to demonstrate frame rate gains with its

So, when Rocket Lake chips are finally unleashed on the world, they could well come with the possibility of getting Hitman 3 bundled for free. Meaning if you were mulling over grabbing one of Intel’s 11th-gen processors and also this shooter, it’ll likely be worth waiting to see if this bundled is realized.

As to when we can expect Rocket Lake to turn up, word from the rumor mill is that Intel will open up

, with the chips hitting shelves at the end of the month. The CPUs are certainly expected to launch at some point in March (barring any last-minute disasters).

Intel’s 11th-gen range will be headed up by an

, trimming two cores away from the current Comet Lake flagship – but delivering considerable performance improvements elsewhere in terms of a

major IPC (instructions per clock) uplift to the tune of 19%

Incidentally, Hitman 3 comes highly recommended, and in our

we declared that it delivers a more compelling story than previous outings, and provides “some of the greatest jaw-drop moments” ever witnessed in the franchise.