Battle of the midrange 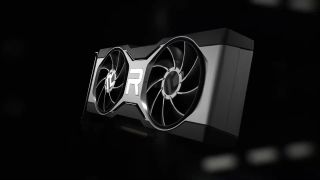 , this new GPU is designed to appeal to more budget conscious gamers that don’t need the raw horse power of those high end cards.

In many ways it was a welcome move, as while AMD has usually been the brand to get if you want excellent value, recently Nvidia has been enjoying unfettered success in the mid-range thanks to its

Finally, it seems like AMD has a modern alternative (especially to the RTX 3070) to challenge Nvidia.

However, while we liked a lot of what we saw with the AMD Radeon RX 6700 XT launch, especially when it came to price – it’ll cost $479 (about £340, AU$610) – there is still one glaring omission when it comes to AMD’s fight against Nvidia – its alternative to Nvidia’s DLSS technology.

In case you don’t know, DLSS (Deep Learning Super Sampling), a clever tool in RTX 2000 and RTX 3000 series graphics cards that uses artificial intelligence and machine learning to cleverly upscale a game to appear at a higher resolution.

It means you can get better looking games running at what appears to be higher resolutions without the performance hit. While a game running at ‘4K’ with DLSS on isn’t really running at 4K, the image still looks very good, and many people won’t notice any drop in image quality.

notice, though, is higher framerates and smoother gameplay. We’ve seen in recent games like

, that turning on DLSS allows PCs equipped with a compatible GPU to achieve steady framerates at or above 60FPS, while also having demanding graphical settings like

In fact, DLSS is the only way to get Cyberpunk 2077 to run at 60FPS with ray tracing on with an RTX 3090 GPU – and that’s one of the most powerful (and expensive) GPUs in the world right now.

However, it’s with budget and mid-range graphics cards that the benefits of DLSS really shine. It suddenly allows these cheaper GPUs to effectively punch above their weights – either by hitting higher resolutions, or by being able to make use of ray tracing.

It means you don’t have to spend a fortune to get amazing graphics in PC gaming. That’s a brilliant thing, and it means despite being $329 (about £240, AU$430), the

Without DLSS, the RTX 3060 can’t play games with ray tracing on and achieve smooth frame rates at 30fps, let along 60fps. DLSS, though, gives RTX 3060 owners the ability to experience ray tracing.

However, while the AMD Radeon RX 6700 XT is pitched to battle mid-range Nvidia cards for gamers playing at 1080p and 1440p, it remains at a disadvantage, as DLSS remains exclusive to Nvidia cards.

While we’ve not had a chance to test out the AMD Radeon RX 6700 XT yet, it does mean there’s a possibility that performance with ray tracing and ultra graphical settings, AMD’s card sees poorer performance than the RTX 3070, or even the cheaper GPUs from Team Green, when they use DLSS to help boost frame rates.

And while you could argue that AMD’s card will offer better native performance, and that relying on DLSS is too much of a crutch – or even cheating – by Nvidia, for many people the image quality will be negligible but the improved frame rates (and even lower prices) will be more important.

To level the playing field, then, AMD needs a DLSS alternative. The good news is that it

AMD FidelityFX Super Resolution, as it’s known, is supposed to be coming at some point,

even possibly this month

, and could offer a similar way to boost frame rates by rendering games at a lower resolution then upscaling them.

However, the mid-range AMD Radeon RX 6700 XT is arguably the AMD GPU that would benefit the most from this, so the fact AMD didn’t mention it at the launch event is concerning.

Until it comes out, DLSS will remain a compelling reason to buy an Nvidia GPU over an AMD one. That’s something that AMD cannot afford to let continue much longer.