Rust Is Big Again On Twitch, Now With Beautiful Music About A Blood God 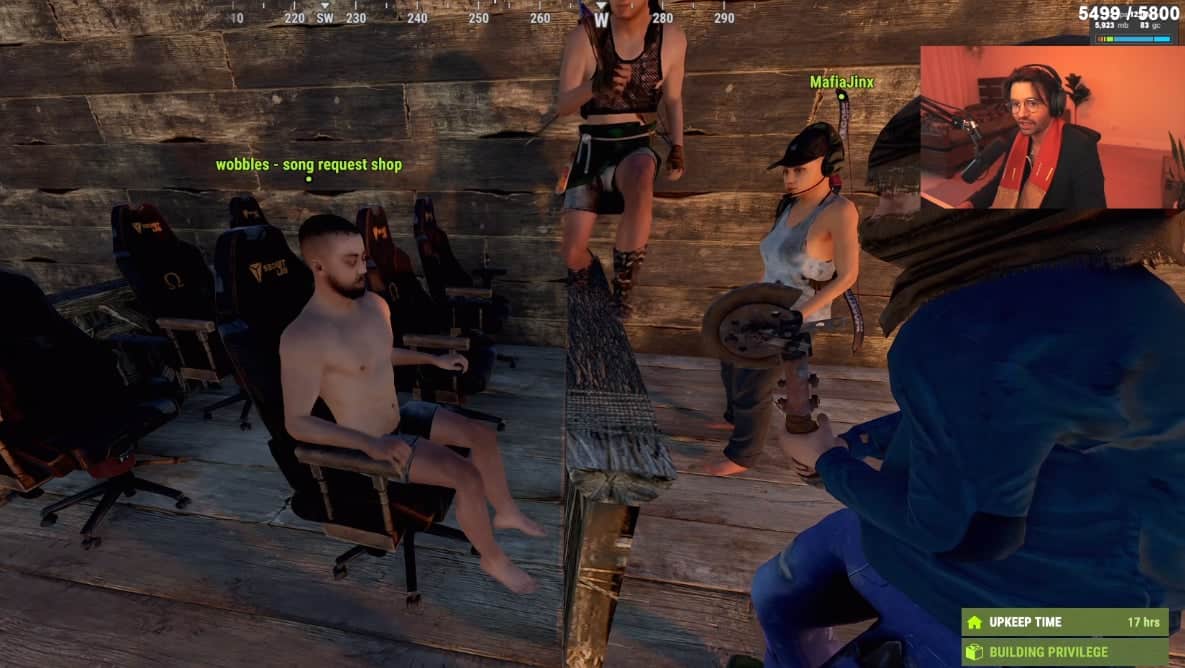 Trends come and go on Twitch, but the Blood God is forever. Or at least, that’s the impression I get from a cult dedicated to this imaginary deity is one of the central throughlines between Rust role-playing’s first popularity explosion late last year and its latest, which is happening right now. This time, though, the cult has a living, breathing soundtrack, and it is sensational.

Rust is doing big numbers again for many of the same reasons it did last time: It’s an excuse for heaps of streamers whose orbits don’t always overlap to coalesce into a self-contained galaxy of gleeful chaos. Also, Rust’s developer, Facepunch Studios, is offering Twitch drops right now, giving viewers in-game incentives to tune in.

The Blood God cult, led by Will Neff (a streamer who so embodies the idea of “go big or go home” that I worry he hasn’t been home in years) is pretty straightforward in its pursuits. Its members like the Blood God. They enjoy building ornate structures in his name and sacrificing people to him — these days by drowning them in a ceremonial chamber. It’s a fairly one-note bit, but it has persisted between Rust booms because of streamers’ commitment to it (and to the Blood God). Nobody embodies this commitment better than one of the group’s newest members, a YouTube streamer who goes by the handle Mr. Wobbles.

A few days ago, Mr. Wobbles — who mostly focuses on music, but has played games like Rust before — surprised viewers by joining the new Rust role-play server run by popular streamer collective OfflineTV, which also kicked off the previous Rust boom on Twitch. He proceeded to wander around for a couple hours until he found the player-made church of the Blood God, at which point he sauntered in, stood at the top of a ramp, and improvised a delicate yet powerful piano ballad about how much he loves the Blood God, occasionally using a demonic setting on a voice modulator to get his point across. After initially fleeing in fear of DMCAs, all the other streamers in the room ceased talking over each other to just listen as Mr. Wobbles — with a voice that lands somewhere between Sam Smith and Damon Albarn — poured his heart out about how the Blood God stopped him from committing the grave sin of going to Taco Bell.

Since then, Mr. Wobbles has become the church’s go-to hymn singer-songwriter. You will not be surprised to learn that these hymns typically come into play when other members of the church are sacrificing somebody to the Blood God. I’ve gotta say, though: It doesn’t seem like the worst way to go. A streamer named JellyPeanut, for example, initially protested his in-game death by drowning, but then those soothing piano chords came in, and Mr. Wobbles comforted him.

“I know, I know,” Mr. Wobbles said in response to JellyPeanut’s faux-incredulousness. “Just listen to the sweet voice as you embrace what you’re about to embrace.”

Mr. Wobbles proceeded to serenade him about how his past indiscretions were forgiven because he gave himself to the Blood God, at which point JellyPeanut basically had no choice but to give up the ghost.

Uber-popular ex-Fortnite pro Ali “Myth” Kabbani also recently got sacrificed to the Blood God, but he was serenaded with a very different, distinctly troll-ier song. Mr. Wobbles crooned about “cranking 90s,” culminating in a mournful chorus of “we love Fortnite.” Kabbani’s viewers, who have been with him through many Fortnite-related ups and downs, got a good laugh out of it. “I have no clue what happened, but that was amazing,” one said in chat.

The best Blood God soundtrack moment yet is also the most ironic. Some of the cult’s members, including Neff, were riding in a ramshackle vehicle together, with Mr. Wobbles providing chill beats in the form of a reggae-flavored song about how the Blood God is “kind and good.” Then another streamer, Travpiper, said that he wasn’t entirely sold on the whole Blood God thing.

“I don’t know if I necessarily worship the Blood God,” he said.

“Do you like the Blood God, at least?” asked Mr. Wobbles.

“I come from the church of Dolly Parton,” Travpiper replied.

Neff, who was sitting behind Travpiper, proceeded to shoot him in the head. This resulted in a viewer-created clip whose title says it all: “Kind and good btw.”

Other members of the group were surprised, to say the least.

“We are a f*cking blood cult,” said Neff in defence of his actions. “I mean, we’re all about love, but you can’t f*ck around.”

And then Mr. Wobbles commemorated Travpiper’s death with a mournful, reverent cover of “Jolene” by Dolly Parton. Again, not the worst way to go.