Everything You Need To Know About Back 4 Blood 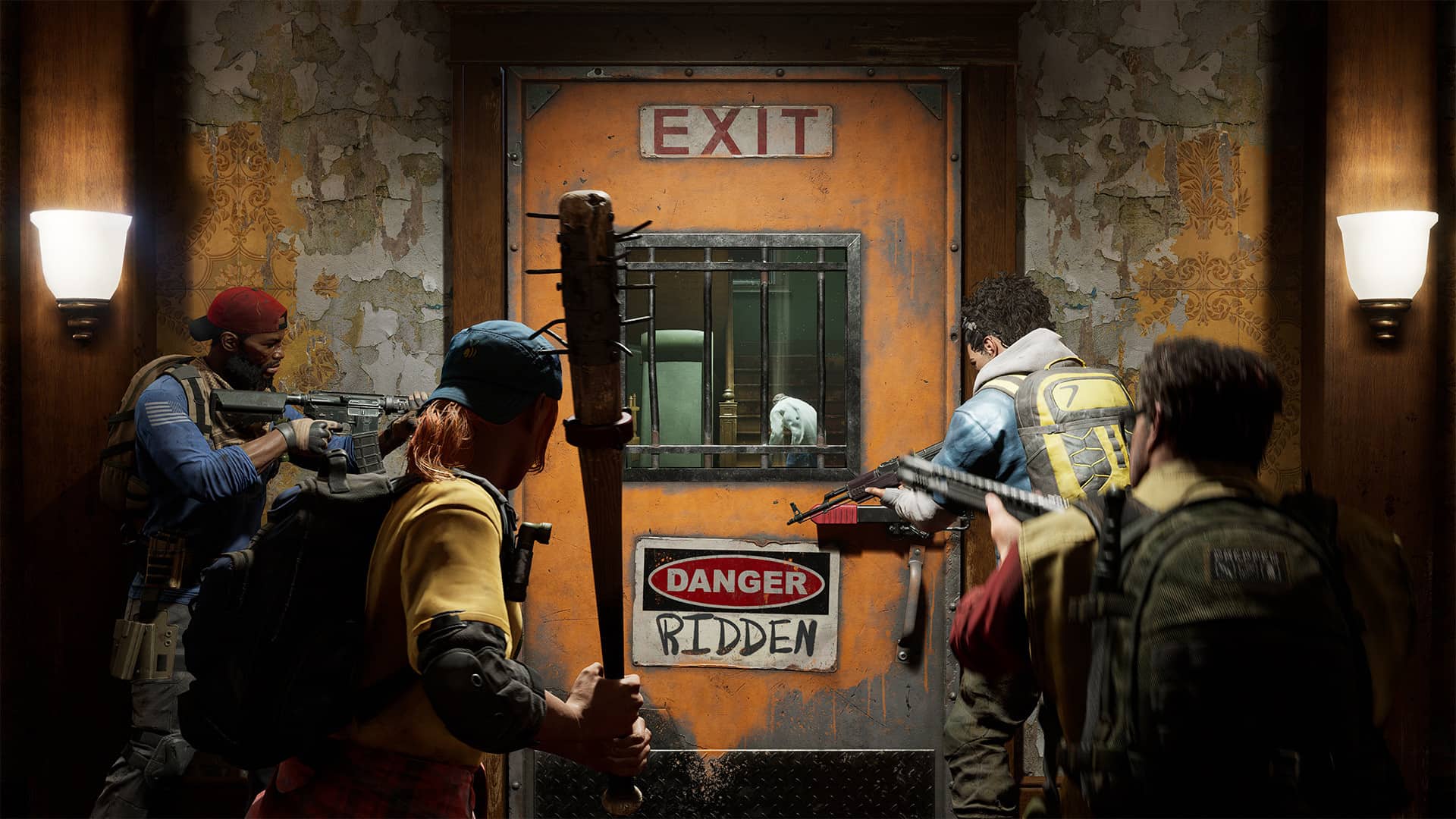 Turtle Rock made their name on the legendary Left 4 Dead series, and after years in the wilderness with VR games and Evolve, the studio has returned to their roots with Back 4 Blood. Here’s everything you need to know about Back 4 Blood‘s campaign and PvP modes, the cards system, characters, betas, release date and more.

A huge amount of zombie shooters like these is the personality of the people trying to survive, and Back 4 Blood is no different. There will be 8 playable cleaners at launch, although only five are accessible in the open beta: Walker, Mom, Huffman, Evangelo, and Holly.

Each character has a unique card that’s automatically equipped at the start of each match. We’ll get into the card system later, but here’s the unique abilities for each so far:

It’s likely more characters will be added after launch, although we don’t know if they’ll be available as DLC, accessible through some form of battle pass system or free for all players. Stay tuned on that front.

Every player starts with a “deck” of cards that impact various attributes throughout the game. There’s a deck of cards available for the story campaign, and a set of premade, 15-card decks accessible for PvP gameplay. If you’re in PvE, your “deck” starts at five cards with more being added as you progress through the various levels.

Across both modes, the first card of your deck will always be played first. This is important for multiplayer especially if you’re relying on having access to a specific trait — like extra weakspot damage or a certain amount of team buffs from the off.

In PvE, you’ll also have what’s known as corruption cards. These are effectively modifiers to the PvE missions. Early on, however, they’ll largely be challenge based: beat the level without setting off any alarms and you’ll get extra copper, an in-game currency that persists throughout your campaign run, for instance.

Regardless of what mode you’re playing, you’ll draw new cards in between rounds or maps. In PvE, you get to pick one of five cards. In PvP, you’ll get multiple draws, but you’ll also have the benefit of knowing what cards you can draw. (This also balances out the upgrades available to those playing as the Ridden.)

The cards largely apply the same effects in either mode. They’re broken into utility, mobility, defence and offence, and there’s no limit of how many cards from one class you can add to a deck. If you want a deck that’s purely focused on boosting sprint efficiency, movement, reload speed, aim speed and using items — stack the deck. Similarly, you can pack the deck with as many team-wide buffs as you want if you prefer.

There are four default decks for the versus mode: Squad Leader, Operator, Soldier and Medic. They’re not locked to particular characters, either.

Weapons have five attributes in Back 4 Blood: firepower (or damage), range, accuracy, mobility and handling. Weapons will also have rarities attached, and a certain amount of attachments you can add to it. Those attachments can be picked up in the PvP mode during the pre-round phase, while in PvE you can purchase attachments directly from a “shop” in the safehouse at the start of every mission.

Attachments have rarity values of their own too, and some weapons found in the campaign mode may have attachments already equipped. All of this will factor into a “star” value, as can be seen in the screenshot above. There’s usually only two attachments available for purchase between campaign levels, however, and you’re not always guaranteed to get an attachment that’s suitable for the gun you have; nobody wants an ACOG scope on a shotgun, for instance.

For the most part, common zombies will die in one shot from just about every weapon. The damage really comes into play when tackling the special Ridden characters. They’re basically the same as special infected from Left 4 Dead: zombies with particular attacks, health and certain styles. You can play these zombies in the PvP mode, although the PvE missions will also have some major zombie boss characters like the Ogre.

You can see how much damage each weapon does — and the drop off range for each weapon — in the game’s hub world. There’s a series of dummies out in the field that you can use for target practice, which will give you a feel of what weapons you like, their recoil, range and accuracy.

Much like Left 4 Dead, the campaign will be the meat and potatoes of the Back 4 Blood experience. You start out on the first level of the first act, trying to escape Evansburgh. Someone called Phillips calls “all Cleaners” back to a place called the “Ville”, and so you start working your way to the next safehouse.

Along the way you’ll encounter a lot of spare copper. This is what basically funds your upgrades, ammo and item purchases throughout the campaign. You can also earn more copper by completing particular corruption challenges: the first one in my gameplay, for instance, was to escape without triggering any hazards.

Like Left 4 Dead and other zombie horde games of this ilk, certain parts of the map will trigger horde attacks. In the first map, that horde is spawned by connecting a bridge to a neighbouring building, which causes the horde instead to rush over the bridge. Other triggers might include flipping a switch, destroying a horde nest, and so on.  You can also cause a horde to appear by setting off certain environmental traps or hazards, like bird nests.

The Ridden are the zombies in Back 4 Blood, and you’ll be able to control the majority of them in the game’s versus mode. You’ll still see these characters in the campaign too, but typically only one or two at a time will accompany a horde attack.

Along with the Common Ridden, who are the basic enemies that die relatively quickly, here’s the Special Ridden characters that you can control.

Each subselection is basically a variant with a slightly different playstyle. All reekers are melee attackers, for instance, but the Exploder can charge forward and manually detonate itself for massive damage.

In PvP, you’ll gain “mutation points” for every bit of damage you do to the Cleaners. These points can then be spent on offensive, defensive or supportive upgrades. You can also upgrade the Common Ridden to spawn faster, more powerful or more versatile basic attackers, giving those NPCs much more durability and utility. Upgrades to the other classes will also persist throughout an entire PvP match, the same way card upgrades persist for cleaners.

To see how a PvP match plays in out practice, check out our gameplay footage below.

There are also special Ridden that only spawn in the campaign. Along with the Ogre seen above, four other boss creatures have been revealed: the Hag, which can instakill Cleaners in a manner similar to the Witch from Left 4 Dead; Breakers, enormously tanky bosses that can also charge and leap at enemies; Worms and Giant Ridden, with the latter being the largest boss seen in the game so far. Not much is known about the powers of the last two, although we’ll likely see more as the game gets closer to release.

Back 4 Blood: Betas and Release Date

Anyone who played the Alpha Back 4 Blood test late last year will automatically gain access to the beta from August 12. Everyone else will have to register via the Back 4 Blood beta page here. You can also gain early access by watching Back 4 Blood on Twitch, but you’ll need to create a Warner Bros account and link that to your Twitch profile.

Here’s the full steps on how the Twitch Drops process works:

For those who preordered the game on console, and are looking for how to play the beta there, here’s the steps you’ll need to follow:

Note: Ensure that you’ve downloaded the PS5 Beta file. If you need to switch, you can select the three-dot icon next to the download button and choose [Game Version]. You’ll want the file labelled, PS5 | Beta | Back 4 Blood Beta.

If you find that you’re still having trouble accessing the Beta download, we suggest giving these steps a try:

If you’re playing on PC, here’s the minimum and recommended specs for Back 4 Blood. Minimum specifications haven’t been released at the time of writing, but we’ll update this post when they become available.

If you’re playing on PC, your two choices right now are through Steam or the Epic Games Store. Both are charging $89.95, and none of the main digital retailers are offering any keys or discounts just yet — although that might change closer to launch.

For those with GTX or RTX-class GPUs, you’ll also be able to access Nvidia’s AI-powered DLSS upscaling. It’s accessible in the open beta already, although you may need to update your drivers for the feature to work.

Well that would be quite the change of pace.

Raja confirms in an interview why Intel has turned to TSMC for its new GPU.

1047 Games reckons the Halo-meets-Portal arena shooter is only 25% done.