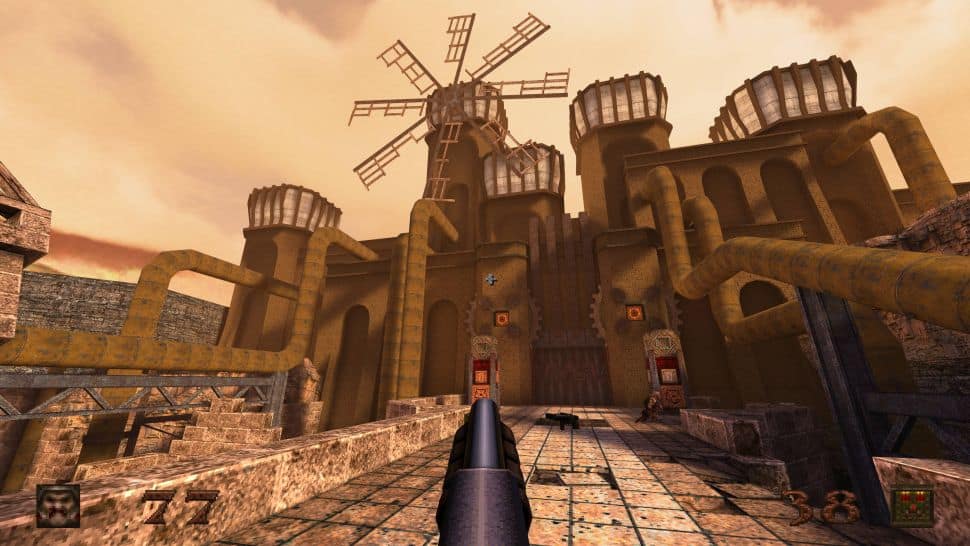 As part of last week’s surprise remaster, landmark FPS Quake has been graced with a whole new episode. Titled Dimension of the Machine, Quake’s latest journey through the slipgate adds eleven more levels to the 1996 shooter, and was developed by Machine Games, the creators of Wolfenstein: The New Order.

While obviously intended as an extra incentive to lure players toward the remastered version, Dimension of the Machine is far from a token effort. In fact, Machine Games’ episode offers some of the most spectacular and challenging Quaking you’ll find in the entire game.

Dimension of the Machine is typically Quake in its simple premise. Chthon, the monster with a name like a sneeze from Quake’s first episode, is up to his old world-eating shenanigans. Before you can shove your rocket launcher down his throat, however, you must first collect five magical runes from five magical realms, all to kickstart an elaborate machine that’ll open a portal to Chthon’s domain.

Prior to diving into Dimension of the Machine, I took a quick refresher course with the remastered version of Quake, and it’s worth briefly going over how both Quake and the remaster fare. Short version, very well. Quake’s lithe shooting holds up brilliantly 25 years after its release, while the remaster does a fine job sprucing up the game without diffusing its atmosphere of brooding Gothicism. It adds more detailed textures and subtly improved lighting, as well as smoother models and animation. But it still looks like Quake, which is to say, brown and moody.

I’m glad I took the time to blast through the base game, and not simply because it’s ace. Doing so highlighted the changes Dimension of the Machine brings to the experience. Firstly, levels are way more detailed, even accounting for the original’s remastered visuals. While fully 3D, Quake’s initial brace of levels are still largely abstract designs. You’ll occasionally see something that’s obviously a castle or a graveyard, but mostly they’re nondescript labyrinths of rooms and corridors, designed to be interesting combat arenas rather than recognisable locations.

By comparison, Dimension of the Machine’s levels are more clearly defined places, with more “realistic” landscapes and architecture. They’re also frequently striking. Dimension of the Blacksmiths, for example, transports you to a dilapidated fantasy realm that’s a cross between Lordran’s Undead Burg and an industrial mining complex, all crumbling stone walls, spidering wooden gantries, and sunken gothic architecture.

Considering it’s based upon Quake era rendering tech (the remaster specifically uses Nightdive Studios’ Kex engine, for various reasons), visually Dimension of the Machine is a real showstopper. Crucially though, the grander visuals don’t come at the cost of interesting level design. Machine Games’ Quake levels are every bit as complex and secret-riddled as id’s 1996 masterpieces. They’re also wonderfully playful. Dimension of the Cultists, for example, commences with you stood outside a cathedral perched on a sheer clifftop. From here, you gradually descend through layers of undercrofts and catacombs before emerging into a fathomless orange abyss. Dimension of the Astrologers, meanwhile, is a cross between Half-Life’s Xen and System Shock 2’s Von Braun, with you darting between rocks floating amidst a purplish dimensional void, before finding yourself trapped on an industrial prison-ship being torn apart by Quake’s eldritch monstrosities.

Not every level is so visually inspired. Dimensions of the Stonemasons is a nondescript warren of grey corridors, lacking the personality of the other levels. That said, Stonemasons best exemplifies Dimension of the Machine’s other key difference from Quake – challenge. Dimension of the Machine is one tough nut, certainly compared to the base game. Playing on standard difficulty, I breezed through Quake’s main campaign. But Machine Games has clearly trained at the Doom Eternal school of nightmarish enemy combinations. Dimension of the Machine is more than happy to trap you in a chamber with two Shamblers and a Vore, or surround you with grenade-spitting Ogres while a squad of Death Knights chases you around the room. Health pickups are also rarer than in the main campaign, while the weapon roster is shuffled with each stage, meaning you’ll frequently be fighting Shamblers with nothing but a shotgun and a smile.

Although bold in its flavour combinations, nothing in Dimension of the Machine feels out of place. While Machine Games lets its imagination loose in the level design, the core mechanics are completely unchanged. The weapons and enemy roster are the same, and every creative decision is intended to showcase Quake’s combat engine. Indeed, Dimension of the Machine helped me appreciate some aspects of Quake’s design I previously hadn’t considered, like how every weapon is designed with its own in-built gambit.Advertisement

This is most evident with the grenade launcher, whose brilliantly bouncy bombs can be the source of a satisfying trickshot or an embarrassing demise, but all of Quake’s firearms are subtly infused with risk and reward. You’re never short of ammo for the two shotguns, but they want for stopping power, forcing you to get up close to Quake’s primarily melee-focussed enemies. The nailgun and super-nail gun are effective against most opponents, but gobble up their Nine Inch Nails-branded ammo that you may need for a more powerful adversary. The rocket launcher is easier to wield than the grenade-launcher, but has an enormous splash-damage radius that makes it terrifyingly easy to accidentally gib yourself.

Dimension of the Machine is an excellent addition to the Quake canon. Its levels feel fresh and exciting without losing that distinctive Quake feel, while the encounters are carefully designed to stretch your shooting skills. Most importantly, though, Dimension of the Machine serves as a lens that puts everything that about Quake in the first place into stark focus. The wonderfully slippery movement, the meticulously designed weapons, and all those big, bouncing gibs. A worthy addendum to a stone-cold classic.