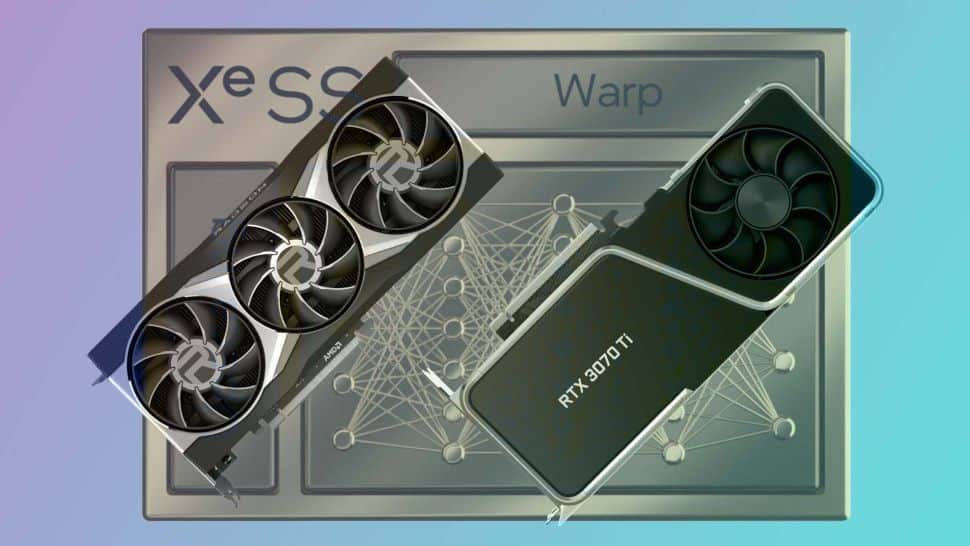 Intel XeSS is an AI-augmented upscaling technology Intel hopes will be a feather in the cap of its Alchemist graphics cards when they finally go head-to-head with AMD and Nvidia. It’s a relatively understood proposition for gamers, not unlike DLSS or FidelityFX Super Resolution, but we also know Intel intends to offer this frame rate-boosting technology on its competitors’ GPUs.

Exactly which competitors’ graphics cards will benefit from the technology will come down to support for DP4A instructions.

So let’s get right into the thick of it. On Intel Alchemist GPUs, Intel XeSS will operate through XMX acceleration—specific matrix engines built into the architecture that perform a role similar to that of Nvidia’s Tensor Cores. It’s this deep learning acceleration that’ll help XeSS boost your performance in-game.

For non-Intel Xe-HPG graphics cards, however, this acceleration can instead be done through DP4A instructions at a somewhat greater expense (meaning it won’t be quite as performant as XMX-accelerated XeSS). These DP4A instructions are used to multiply 8-bit integers (one byte, INT8) accumulated into one 32-bit integer and then run on a GPU’s ALUs. These are also used to accelerate certain operations that do not require high precision, i.e. deep learning.

Modern GPUs support DP4A (Signed Integer Dot-Product of 4 Elements and Accumulate) in line with Microsoft Shader Model 6.4, while other older GPUs don’t. That means some GPUs can accelerate certain instructions required by XeSS, while others are unable to.

AMD has confirmed that RDNA 2 graphics cards support DP4A, in a comment to ComputerBase. This is achieved through Rapid Packed Math, a feature originally introduced with AMD’s Vega architecture, though AMD says it’s only the RX-6000 series that will support DP4A instructions.

You don’t only have to take AMD’s word for it; the RDNA 1 ISA reference guide [PDF warning] does not list DP4A compatibility, nor does first-gen Vega. While the RDNA 2 guide notes “Dot product ALU operations added accelerate inference and deep-learning” as a feature change with the more recent architecture.

It’s worth noting that 7nm Vega, found within the Radeon VII, lists support for DP4A operations, which could mean it too supports XeSS and owners of that card can finally feel justified in purchasing it instead of an RX 5700 XT.

AMD does, however, note that older GPUs may in theory be able to run XeSS on FP32/FP16 ALUs, but this would be slower. We’ll probably never find out if that’s the case, though, as Intel has already largely shot down a more general FP32/FP16 implementation of XeSS in a recent interview with WCCFTech, citing possible performance questions.

I’ve reached out to AMD for any further clarification on DP4A support and will update this article if I hear anything back.

Onwards to Nvidia, and it appears that the company’s Ampere and Turing architectures will support DP4A. No qualms there. In fact, the Pascal architecture should also support DP4A, actually as the first architecture to support the instruction for team green.

This is potentially great news for 10-series owners, as Nvidia’s own DLSS technology is supported only on 20-series RTX cards or newer.

In the aforementioned interview, Intel’s Karthik Vaidyanathan also states it will not be looking to program specifically for Nvidia’s Tensor Cores as that would require bespoke programming.

I’ve also reached out to Nvidia to see if it will share any more information on supported GPUs.

As for older Intel kit, it appears that Xe-LP based iGPUs found in 11th Gen mobile chips should support the instruction and therefore work with XeSS. I’ve not seen any evidence to prove any previous iGPUs or desktop iGPU models will be supported, however, so as far as I’m concerned today the cut-off will be more recent Intel Xe-based chips.

Still, it’s looking like large numbers of older discrete graphics cards will be open to using Intel’s XeSS technology. That should be a big win for Intel’s technology, but does rely on it being able to deliver higher frame rates without too much loss in clarity, even with DP4A over XMX. Success will also rely on game support, too, and Nvidia has a multi-year head start in that regard.

If it all goes Intel’s way, though, XeSS is sure to crank up the pressure on AMD and Nvidia.