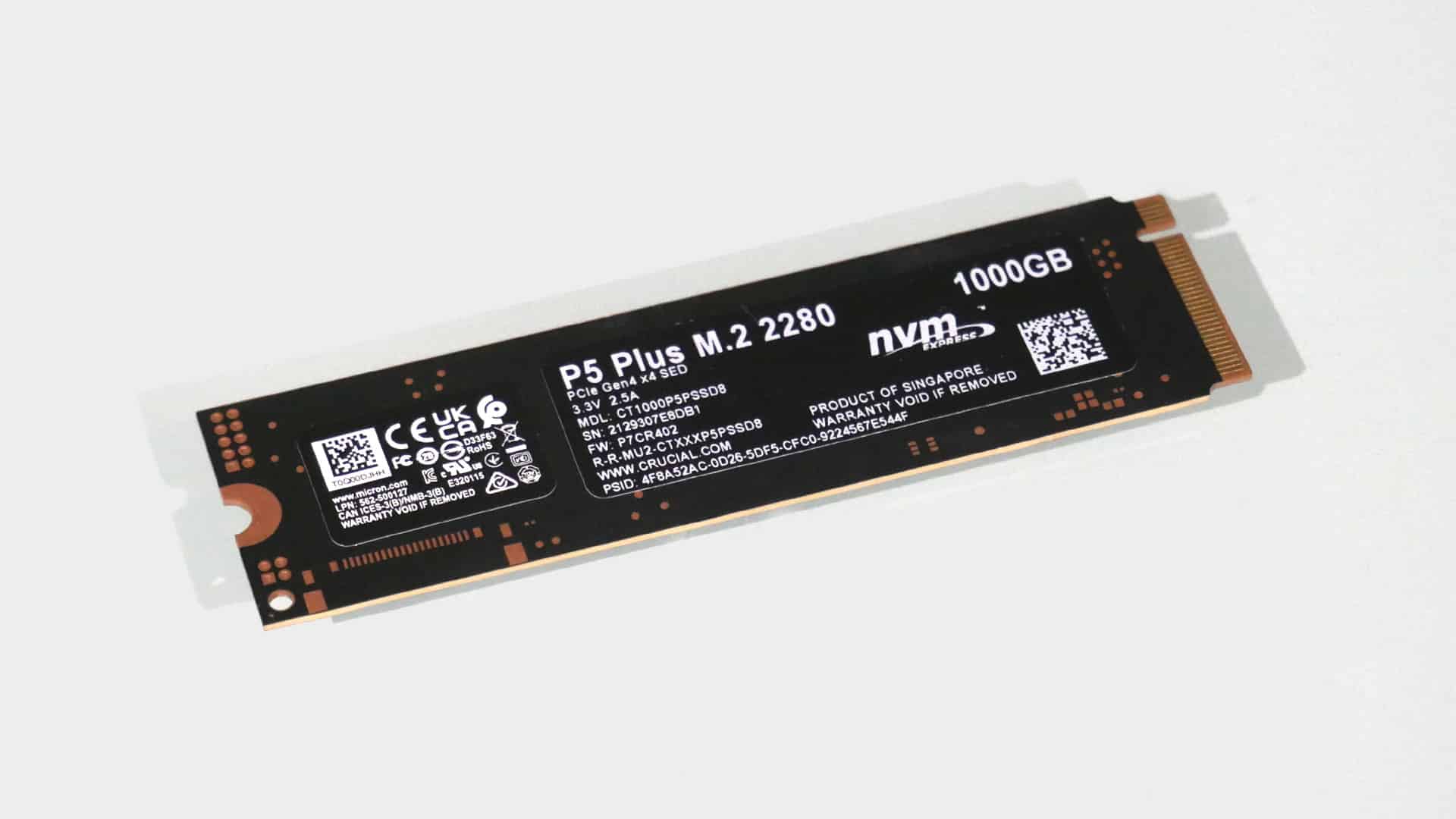 Crucial has been surprisingly slack when it comes to rolling out high-performance NVMe solid-state drives. The new Crucial P5 Plus, tested here in 1TB configuration, does pretty much zero to change that. So it’s unlikely to bother the best SSD for gaming lists, but still, it does come at a tempting price point.

It’s over two years since the very first M.2 drives with PCIe Gen 4 interfaces appeared. But only now is Crucial rocking up with its own competitor. Of course, it’s also only relatively recently that Intel released a PCIe 4.0 capable desktop platform, namely Rocket Lake. Even now, the proportion of existing PCs with Gen 4 capability is small and plenty of new desktops are still being sold without support.Crucial P5 Plus specs

Anyway, Crucial is in the business of cranking out mainstream drives in big numbers. So, it probably made sense to wait until the ecosystem is good and ready for any new technology. As it happens, Crucial is also in the business of making its own SSD technology from top to bottom. Crucial is, of course, the retail brand of Micron, one of the world’s great chip manufacturers.

Consequently, the Crucial P5 Plus isn’t just the brand’s first PCIe Gen 4 drive. It also gets Micron’s latest TLC or triple-level-cell flash memory. The new 176-layer NAND chips are said to be a major upgrade over Micron’s familiar 96-layer flash. They’re claimed to offer lower latency, more throughput, and better endurance. In other words, better by pretty much every metric.

Less is known about Crucial’s new PCIe Gen 4 controller chip. Its Gen 3 predecessor was a six-core effort, so that may be the case again here. All we know for sure is that it packs eight memory channels and hooks up to 1GB of DDR4 cache on this 1TB drive. For the record, the 500GB model gets the same quantity of cache, while the 2TB drive is loaded up with 2GB.

Other features supported by the revised controller are hardware-based AES 256-bit encryption and the obligatory SLC cache mode, allowing a portion of the drive to be dynamically allocated to run in faster single-level-cell mode. All told, Crucial says the 1TB P5 Plus is good for 6,600MB/s peak reads and 5,000MB/s writes. On paper, that’s a little off the pace of the very quickest PCIe Gen 4 drives, including the Sabrent Rocket 4 Plus and Adata XPG Gammix S70. But we’re still talking about GB/s of theoretical bandwidth.

Rounding out the relevant speeds and feeds is write endurance for this 1TB model of 600TB, which should be plenty for all but the most demanding users. Crucial backs the drive with a five-year warranty, which again will cover the likely use case for most installations. Software-wise, along with Crucial’s own drive-management app, Acronis Cloning is also included, which is handy if you’re transitioning an existing OS onto a new drive.

As for the minor matter of how this drive actually performs, it’s definitely good for the claimed peak sequentials, with writes absolutely dead on the 5,000MB/s figure in CrystalDiskMark and reads slightly higher at over 6,800MB/s. Slightly less invigorating are the short queue depth 4K random numbers. The QD1 reads are a mere 69MB/s and the writes come in at 174MB/s.

These aren’t catastrophic results. But by way of example, WD’s Black SN850 returns around 90MB/s and 315MB/s, respectively, and every other PCIe 4.0 drive we’ve tested is at least a little quicker.

Of course, synthetics like that only tell part of the story. In PC Mark, the Crucial P5 Plus nets 3,140 points in the Full Storage Index, which is one of the very best performances we’ve seen. On the other hand, the P5 Plus didn’t exactly excel in the Final Fantasy XIV: Shadowbringers level load test.

If there is a more substantial question mark, it concerns the related topics of long-term sustained performance and thermals. During our internal file copy test, we found performance dropped off after around 300GB of writes, which probably reflects the size of the dynamically allocated SLC cache. However, there was also a temporary blip after 200GB/s which may have been thermal throttling. In our testing, the P5 Plus hit 69°C, which is fairly toasty.

While it’s hardly an overheating basket case of an SSD, this drive obviously has no cooling to speak of. So, we wouldn’t be entirely confident about its thermal performance as the drive ages. It’s unlikely to get better with use, that’s for sure. Advertisement

Overall, the Crucial P5 Plus is certainly attractively priced for a PCIe Gen 4 drive with quality TLC rather than cheap QLC flash memory, undercutting most if not all of the competition—and by a decent margin compared to the priciest drives like the WD Black. In that context, were we feeling particularly price-sensitive, we’d probably suck up our minor concerns over operating temps and IOPS performance.

A punchy 1TB drive like this would make for a very nice overall computing experience while offering enough storage for a decent library of favorite games, relegating only lesser-played titles to a clunky old magnetic drive or perhaps a cast-off SSD. We’ll take that.