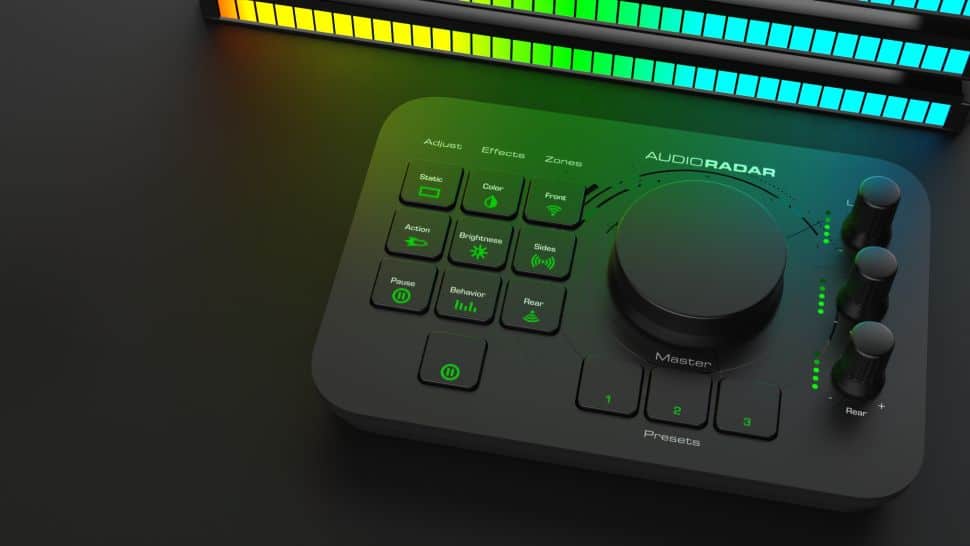 This gaming audio tool turns in-game sound cues into visible lighting surrounding your gaming monitor. Built by Airdrop Gaming, Audio Radar aims to make it easier for those who are deaf or hard of hearing to stay at the competitive edge while gaming.

It works like this: you attach six LED RGBW light bars all around your gaming monitor, and each of these lighting modules acts like an audio monitor, mapped to the 3D space within your choice of game.

Say you’re playing a game where enemy position is all-important. Ideally in a game such as this, you’d be able to hear whether footsteps approach from in front of you or behind you, because if you couldn’t you might find someone gets the drop on you without you standing much of a chance. It’s this sort of positional audio that the Audio Radar says it’s able to mimic with lights, thus giving those without perfect hearing more of a fighting chance in a fair fight.

If those footsteps are approaching from in front of you in-game, the top two LED bars will start to light up and grow in intensity as the footsteps draw nearer.

It looks like a great tool, and it’s heartening to see such a device being targeted at those who are hard of hearing or deaf primarily, with benefits to other gamers taking a backseat.

The product, which is still only an Indiegogo campaign today, is also planned with another device called the Control Center. It’s fairly self-explanatory, but beyond the usual features you can expect, it also offers some of those other benefits I was talking about, such as an all-white lit streamer mode for better lighting.

The Audio Rader is also listed with support for Xbox and PlayStation, so no matter what device you game on it could come in handy. A few gamers have already taken part in user testing of the product, too.

“It was a continuous warning system and it worked perfectly for my style of play,” Jamal, a gamer who is 100% deaf, says.

It’s still very early days for the Audio Radar, though. While I’d usually wait and see if something comes out of this kind of early project, this one definitely looks like a solid idea that could be pretty great for hard of hearing folks.

The actual product Indiegogo launches on October 15, 2021, so keep an eye out for it then over on this page. If this thing takes off, I could definitely picture it being integrated into a monitor directly, which is the sort of RGB lighting integration that we’d love to see.