Why is Quake so damn fast? John Romero explains 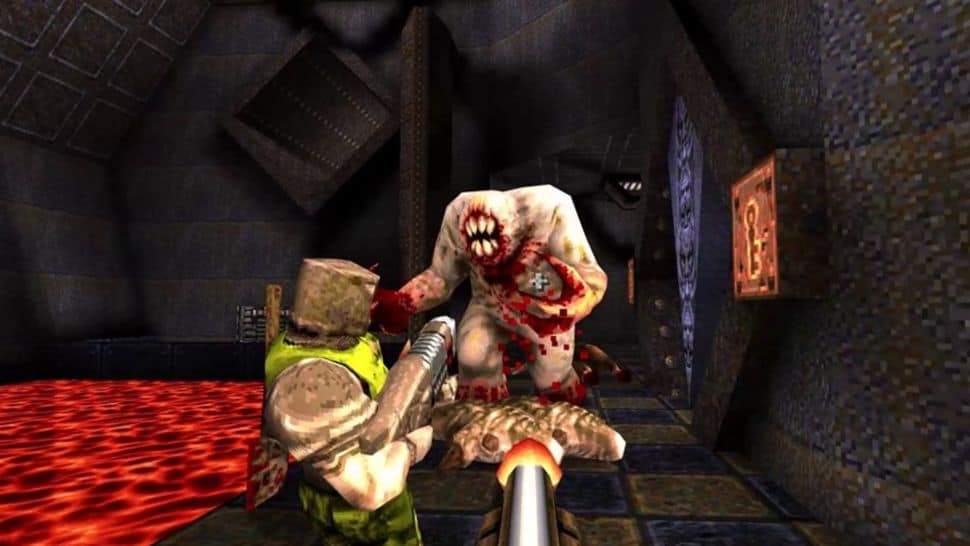 It feels like a given that you move absurdly fast in the original Quake: Classic shooters are fast, that’s just how it is. But why? It wasn’t a given that id Software would make Quake or its other shooters so damn fast. Was it due to some MS-DOS limitation they faced? Did it have to do with the modest level geometry of the time? Is it simply harder to design slower games?

No, says John Romero, Quake’s lead designer. It wasn’t any of those things. Really, id Software was just showing off.

Here’s a piece of information that will likely upset a portion of the PC Gamer audience: My only real experience with Quake was the Xbox port of Quake 4. I was born in 1991, and while just about everyone my age has blown apart some cacodemons and fended off a few gothic Nazis, fewer have context for the lands of Strogg. Despite the successful reboots of Doom and Wolfenstein, the opus of the id Software estate was left undisturbed from its resting place until the Quake remaster released this summer. (At least if you ignore Quake Champions, which is easy enough to do.)

When I downloaded that remaster and leaned on the W key, I skated to the other end of the corridor so fast it felt like I had opened up the console and edited out the momentum cap. 25 years after its release, Quake’s quicksilver speed still thrills and disorients: You ping-pong back and forth between arenas, clicking out rockets and shotgun pellets in the split seconds when an enemy is in your crosshairs. You blaze across the map with no clear direction, knowing that you’re too swift for any enemy to catch your blindside.

If you’re like me, and you did not grow up within the FPS golden era, the original Quake feels like it arrived out of a totally alternative PC tradition. After it, developers slowly but surely drained Id’s breakneck pace out of the FPS, adding cover and slo-mo and scopes and complex ballistics.

Maybe slow is the baseline, though: Romero says that Quake’s speed was a reaction to the slowness of other games at the time.

“3D games moved very sluggishly at the time,” he says. “Look at Ultima Underworld. That was the first full 3D game out, and it was extremely slow. When we made Wolfenstein, and optimized that game for the crap hardware, we maxed the speed as much as we could. We wanted to show people what games could be. What they were going to be like. Super fast. We optimized speed from that point onwards, and that made our games stand out from the rest of the industry.”

Romero tells me that game speed became id Software’s guiding philosophy, and that’s despite working during a strange, prehistoric time before consumer GPUs: the fabled mid-’90s. The team was working with a tight economy of textures, weapons, and enemies.

“We didn’t want the design to decrease the speed. We took stuff out of Wolfenstein to keep the speed up,” says Romero. “It was all about showing off what your computer could do.”

I was surprised to learn that Quake isn’t the speediest shooter id Software made in those early days. In fact, it’s the slowest. Wolfenstein had the fastest pace, followed by Doom; Romero says they intentionally juiced the Martian momentum to compensate for Doom’s labyrinthine levels. (Nobody wants to plod around looking for the blue key.) That puts Quake at the rear, which is mind-boggling given how nimble it is compared to the typical shooter of today.

“Quake deathmatch is fun but it feels slow to me because of Doom. I still play a lot of Doom deathmatch,” says Romero. The man has lived with Quake momentum so long that nothing can impress him anymore. That’s about what I expected.

I asked Romero if he misses the old, ultra-fast FPS model. I mean, we lived through that brief mid-2010s motion-shooter boom where Call of Duty jarheads suddenly inherited the ability to double-jump, but that doesn’t quite scratch the same itch as Quake’s flatout horizontal acceleration. Romero demurs. Yes, the big budget space might’ve moved beyond what id Software was cooking up in Dallas, but plenty of indie studios scratch the same itch.

“If you play Ultrakill, you’ll find one of the fastest shooters around. There are still games that do that. Dusk, retro shooters, I mean, Doom Eternal. They’re not gone. It’s just that every game isn’t doing that anymore,” says Romero. “I like having a variety of games.”

He’s right, of course. If a Quake reboot ever comes to pass, we’ll see if the present-day id Software still values speed above all else. I hope it doesn’t deviate from its religion, and players can hunt down alien battle-mages with the same ferocity they did in 1996. If there’s one thing the remaster proves, it’s that FPS players are still absolutely capable of being dazzled by speed.