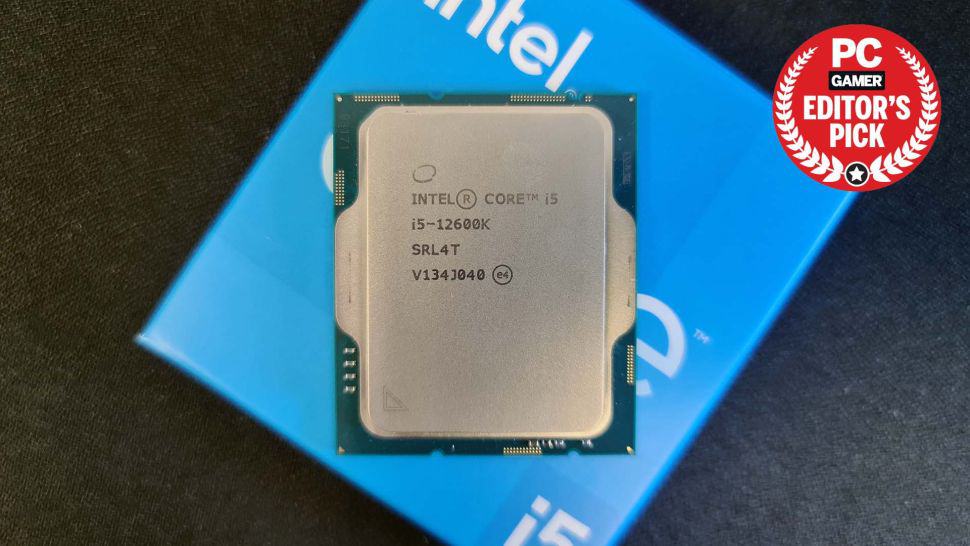 The Core i5 is the CPU that really matters for most gamers. It’s cheaper than a Core i7 or Core i9, but it still offers the fundamentals of what makes those chips great for gaming. With the Core i5 12600K, the first Core i5 of the Alder Lake generation, that’s no different, although that may be understating its abilities.

That’s because the Core i5 12600K is something even more impressive entirely: the equivalent of the top previous-gen chip in a package that’s almost half the price.

Yes, it only took one generation, and less than 12 months, for Intel to take its Core i9 performance and deliver it inside a Core i5 package. The Core i5 12600K really is shockingly good, and since it’s not pushing to the very limit of what Alder Lake can deliver in a single die, it’s a more power savvy design than the Core i9 12900K, which makes for a more well-rounded processor for mid- to high-end builds.

The deeper you dive into the Core i5 12600K’s performance, the more you start to realise it’s the real star of the 12th Gen show. Or at least until the rest of the Alder Lake desktop chips show up sometime early next year.

But who knows what the Core i5 12400, or any other cheaper Alder Lake chip, may hold for us in the future. The Core i5 12600K is the best way to spend your budget on a gaming CPU today.

The Intel Core i5 12600K is a CPU in a 6+4 design, and what I mean by that is it has six Performance Cores (P-Cores) and four Efficient Cores (E-Cores). This complimentary design is due to the Alder Lake architecture’s new hybrid approach, which you can read up on in more detail in our Intel Core i9 12900K review, though I’ll lay out the basics here too.

The Golden Cove architecture aims to be something close to your traditional CPU core as we gamers would know it, built to excel at single-threaded performance and deliver high clock speeds. These are the P-Cores.

The Gracemont architecture is something Alder Lake borrows from Intel’s Atom lineup of low-power chips. These are built to be efficient, and you can fit more of them onto a chip without taking up too much space. These are the E-Cores.

That’s dramatically underselling both architectures’ intricacies, but it helps explain the Core i5 12600K’s slightly obscure specs. This chip comes with six P-Cores and four E-Cores, as I have mentioned, which is actually a slight increase in overall core count over the Core i5 11600K. It’s also technically more physical cores than a Core i9 11900K, which as you’ll see when we get to the benchmarks, turns this Core i5 into an 11th Gen Core i9 killer.

Before we get to those juicy details, let’s cover off the remainder of the Core i5 12600K’s specs.

Both P-Core and E-Core share access to 20MB of Intel Smart Cache (L3), along with the integrated graphics onboard, which is the new UHD Graphics 770.

The Core i5 12600K sits just below the 5GHz mark on its P-Cores at stock frequencies, which means you’ll have to tweak it yourself to push it over that milestone. That shouldn’t be a problem with Intel’s promise of overclocking headroom.  Its E-Cores will reach 3.6GHz at their fastest, too. The P-Core base clock is actually higher on this model than the Core i9 12900K, however, at 3.7GHz.

The Processor Base Power (PBP) of the Core i5 12600K is 125W, the same as the entire Alder Lake desktop CPU lineup to date. You might be wondering why it’s PBP and not TDP, and that’s because Intel has done away with TDP altogether for the 12th Gen. Instead, you’ll see PBP reference what used to roughly be the TDP of Intel’s processors, and a new Turbo Boost Power (TBP) mark the maximum draw of these chips during certain workloads. In the Core i5 12600K’s case, that TBP is 150W.

The price of the Core i5 12600K is recommended around $289–$299 on Intel’s own website, although that’s traditionally not been the price you’ll see as a customer on the shelves without discount. Newegg has the Core i5 12600K for sale at $319.99 instead, which is more likely going to be the buying price for this processor for a while.Advertisement

Something slightly tangential to the specification of this chip, but definitely worth mentioning, is that Intel recommends using Windows 11 with these processors to get the most out of them. That comes down to that hybrid architecture and something Intel calls the Thread Director, which helps the OS schedule posts with greater granularity as to what’s going on. Though it does mean that with this chip you’ll probably be using an OS that we’re not entirely happy to recommend today.

And another thing, since this is a brand new 12th Gen chip with a brand new 12th Gen socket (LGA 1700), you’ll need a new motherboard to plug the Core i5 12600K into. That means a Z690 motherboard today, and could mean you have to spend a little more money on it than you might want for a more mid-range or budget-savvy build. We’re expecting cheaper chipsets next year, though, so if you’re happy to wait, I believe the market will come to you.

In the meantime, one way to save cash would be to grab a DDR4-compatible motherboard and save on your memory kit, instead of purchasing a DDR5-compatible board and buying the latest, greatest DDR5 RAM available. It is quick, though.

It’s no secret now that the Intel Core i5 12600K is one helluva gaming chip. The single-threaded performance of the Golden Cove P-Cores means it blasts through most of our benchmarking suite with relative ease, and only just falls behind the Core i9 12900K in a few games.

There was one pause for me in the Core i9 12600K’s benchmarking, however, and that’s when it came to Assassin’s Creed: Valhalla. This game simply will not boot on either of our Intel Alder Lake test systems, and it’s an ongoing issue (likely related to the DRM issues Intel has officially confirmed with Alder Lake) that Intel has told me it is looking into, with Ubisoft’s help.

For all the gains the hybrid Alder Lake architecture seems to be handing the Core i5 12600K, then, it’s also causing some launch day trouble.

Onwards from gaming and let’s not forget the productivity and multithreaded performance on offer here, which will help with all your creative application needs.

The Core i5 12600K crushes the Core i9 11900K in multithreaded testing. The same goes for the Ryzen 5 5600X. Perhaps that’s not that surprising, considering it does have more physical cores than both chips, but I have to say it’s surprising to see those E-Cores really making waves when it comes to multithreaded workloads. The Core i9 11900K actually has as many threads as the Core i5 12600K, but they’re no match for the real deal on die. At least not a 12th Gen die, anyways.

It’s impressive enough beating the Ryzen 5 5600X, which is a chip we’re very fond of here, but it’s another thing altogether for this chip to run circles around the Core i9 11900K. And we’re not done yet, if you look at the Core i5 12600K’s CPU package power, it’s a far less power-hungry processor than the Core i9 11900K, and more efficient by some margin despite crushing its performance.

It’s still not quite a match for AMD’s Ryzen 5 5600X, and only a little more efficient than the 16-core Ryzen 9 5950X, which is saying something about the overall efficiency of Zen 3 and AMD’s Ryzen 5000-series. That’s the same story with the high-end Core i9 12900K, too, Intel just can’t seem to nail down the efficiency that AMD is able to deliver.

Generally, though, the Core i5 12600K is a fantastic gaming chip through and through, and I think it’s a prime example of what Intel can deliver when it’s not chasing AMD’s coat tails. It’s roughly priced the same as AMD’s chip, perhaps a touch pricier in practice, but it offers an entirely different class of performance with reasonable power demands.

AMD has its work cut out following the release of the Core i5 12600K, and that’s great news for PC builders. Intel’s mid-range hasn’t felt at quite such a loss as its high-end chips these past generations, with chips such as the Core i5 11600K being one of our favourites in recent years, but the Core i5 12600K really takes those agreeable Core i5 qualities and turns them up to 11. Or rather, 12.

Also in as much as the Intel Core i5 12600K isn’t only a mighty chip on its own, it’s the keys to a whole next-gen platform. DDR5 and PCIe 5.0 SSDs are all a little more affordable for the Core i5 12600K’s clever balance of price and performance, and that makes the entire 12th Gen platform a little more digestible if you’re not prepared to spend thousands of dollars.

There is still the question of platform costs, which will play into AMD’s favour, at least for a little while. So maybe AMD isn’t quite shaking at the thought of the Core i5 12600K just yet, especially as AMD should have plenty to come back at Intel with in the new year, by the looks of it.

Yet in offering the same performance, if not better, for nearly half the cost of the top processor launched in this same year—Rocket Lake came out in 2021, people—Intel has really won me over with the Core i5 12600K.

There’s some glimmer of hope that Intel may be able to deliver enough of this chip for its price to stick around, and that means we might finally have a piece of gaming hardware that actually feels like you’re getting a good deal.

With the state of graphics cards right now, even suggesting that feels wrong. But it’s true, the Core i5 12600K is a good deal. With some decently priced Z690 motherboards, it might even be a great deal for a gaming PC build. And that’s a PC that can offer high-end frame rates with the right graphics card—this is a suitably high-end chip masquerading as a mid-range hero, and doing a great job of it.

Perhaps the Core i5 12600KF is my actual pick for the best CPU for gaming today as it’s theoretically going to sit as the cheaper of the two. However, if you do decide to pick up either of the two, presumably whichever you can find for cheaper, you wouldn’t be putting a foot wrong.