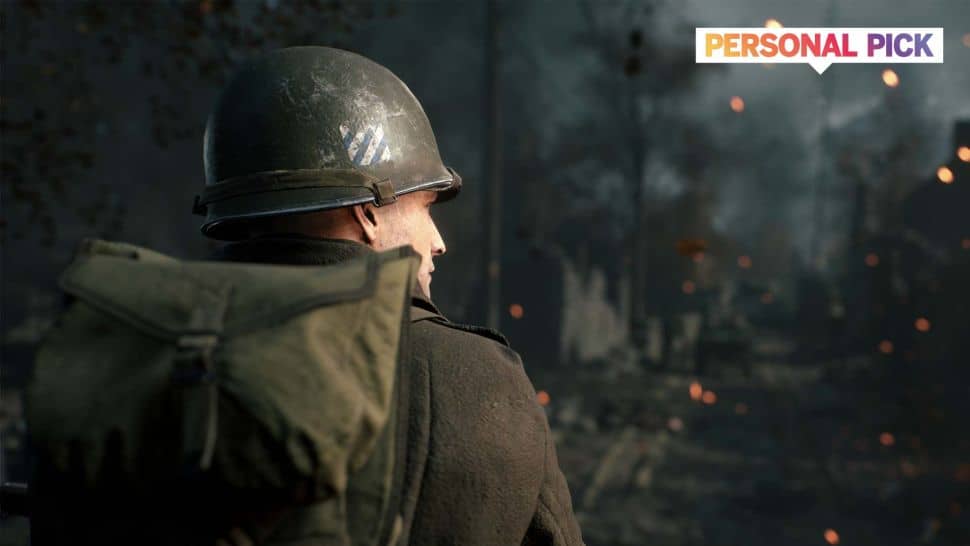 June 6, 1944. Sainte-Mère-Église, Normandy, France. I’m laying down next to a stream on the corner of a field far from the primary objective. I’m in a sniper unit, just me and an officer, and I’m trying to circumvent the enemy defense and mark enemy armour as they move into position. Unfortunately it’s not going to plan.

The tip of my helmet is covered by enough earth to prevent incoming rifle fire from penetrating my head, and behind me my brother in arms is laying still trying to tend to a wound. We’re laying low as the bullets speed overhead, just hoping all of our body parts are sufficiently out of sightlines. The fire begins to cease after a few minutes, the enemy somewhere in the hedgerow around 400ft away take us for dead or long gone. At that moment a fellow soldier storms past the bushes and brazenly strides over our position. We try to tell him to keep his head down or he’s going to get real personal with the business end of a rifle, yet he pays no heed to our warnings. He hops over the mound of earth separating the two warring factions, and is instantly shot dead.

Once again we are just two boys stuck in a rut, though not for too long. The firefight has caught the attention of others, and right away we hear a low hum in the distance—the sound of metal gears clanking fills the air. We dare not raise our heads past the thin layer of dirt that protects us, and that’s probably for the best as a tank rolls over our position, nearly crushing us both between its worn, crunching tracks. Eventually it shunts away down the hedgerow, though whatever relief we feel swiftly disappears as the tank’s turret spins around to us with a horrifying mechanical whirr, until I’m staring into the abyss of its main turret’s barrel.

In a moment we’re up and sprinting down the bank of a stream as a hail of machine gun and rifle fire tears up the beautiful French countryside on either side of us. A single blast from the tank’s main turret nearly scuppers our chances entirely, but somehow we make it to the other side of the stream. After which we’re desperately sprinting towards a lonely barn. From there, we regroup while being painfully afraid to peak above the windows in case a sniper decides that’s enough of this cat and mouse game. I’m running low on ammo and we’re no longer able to bandage. At this point we’re laughing at how we’ve danced with death for so long yet haven’t been sent first-class to the pearly gates.

At that moment, a ping of a bullet cuts through my officer’s helmet and I’m alone. Before I can even see where the bullet came from, the world shakes as fire rains down near my position. I peep over the window, bewildered, and find Alpha company storming through and taking up offensive positions on the enemy that nearly had me six feet under. The battlefield has enveloped the small stream and adjacent fields, and before long it’s a blood bath—there are soldiers calling for medics, screaming out obscenities, and rushing into the fray to the battle cries of those around them to their likely deaths. What was once peaceful French countryside has become the welding point of two powerful nations’ deadly war machines, and in a matter of only minutes.

This is Hell Let Loose: the realistic WW2 multiplayer shooter that is brutal, tactical, intense, and exceedingly fun at the same time. You’ll spend your time getting barked orders at by frustrated commanders, engaging in deadly firefights around tight streets, and trying your best not to be one-shot from across the battlefield by some lucky squaddie.

The game’s based around a few key battles in WW2 history, such as Carentan, Foy, Omaha Beach, and more recently Stalingrad. Each map has a series of objectives that you must control, either as an offensive, meaning you want to push the enemy out of its garrisons and out of position; or in all-out warfare, which is an epic tug-of-war for area domination.

To achieve any progress, and I mean any, you need a team that can work together. This starts with the soldier on the ground, who maintains the role of rifleman, assault, anti-tank, engineer, machine gunner, support, or sniper. Then there’s the officer, one to each squad, who is able to set up small outposts for teammates, or with the help of a support class, a teamwide garrison. At the top of the chain the commander, who relays messages, targets, and objectives via a direct line to the officers. Everyone must play their part in order to have a successful offense or defense.

And some players will play their part exceptionally well.

There are those that take Hell Let Loose seriously—and you can because it’s a fairly realistic shooter by way of mechanics—though many players simply like to ham up their role. These are the people you’ll find screaming rousing words, or just screaming, as they charge down the enemy. The medics that rush around to bring teammates back from the brink of death, dispersing bandages and pep talks as they come to get you back into the fight. The Eisenhower wannabes on voice chat, and the uptight British offices with a view to getting a medal no matter the cost.

Ultimately, Hell Let Loose is a WW2 shooter that’s unlike most I’ve played. It’s a more traditional shooter than the big hitters like Battlefield V and Call of Duty: WW2, though exposes that fundamental idea of living out a famous WW2 battle with commendable simplicity. There aren’t many menus, and you have to rely on communication and teamwork to win. In those mechanics there’s a game that’s more of a tactical, bloodsoaked reenactment than a free-for-all WW2 fantasy shooter, and it’s only getting better with each update.