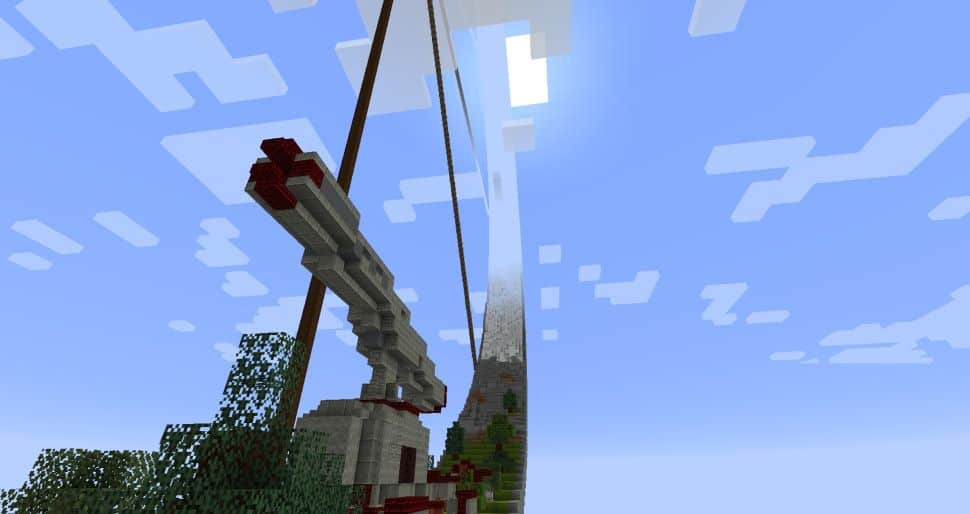 If there’s one thing a world made of cubes isn’t supposed to do, it’s circles. Yet ambitious Minecraft players just love defying logic to build impressive round structures. One fearless builder has gone even further, tossing every game law out the window to build a ring that rotates. Yes, an entire moving Halo ring complete with different biomes, a beam emitter, and a crashed Pelican. Best of all, you can download and explore the thing yourself.

The Minecraft YouTuber called Reach says that his Halo ring was originally inspired by a build shared by another creator. This smaller ring world is impressive, but commenters on that post suggested it would be even cooler if it actually worked. Reach decided to take on that challenge, using WorldEdit and the Create mod to build and engineer a ring that actually moves.

It was a serious undertaking. He used the Clockwork Bearing blocks in the Create mod to handle the ring’s movement. A single clockwork bearing attached to the ring’s rim couldn’t quite get the job done, it turned out. “The first time I tried to make it move and it didn’t render due to the entity generated being too large for Minecraft to handle,” he explains.

So Reach opted to split it into four sections, each with a rotating bearing and an arm. When that still didn’t work, he wound up with eight bearings, all attached to sections of the ring like spokes. “I did think it was not gonna work,” he tells me, “but my stubbornness and wanting to make something unique for YouTube and my audience was more than enough for me to pull through.”  After all that? Holy hell, the thing moves.

If you want to witness the majesty of a ring world yourself, you can download the project over on Planet Minecraft. You’ll need to run it on Minecraft version 1.16 along with a few different mods: Forge, Create, Flywheel, and some custom Halo textures if you like. Once inside, you’ll manually start up the bearings to get the thing going, but after you’re down on the ground it’ll keep on ticking.

It doesn’t move continuously, so you won’t be struggling to keep up with a forever moving hamster wheel. The entire ring turns in increments about every 30 seconds. All the better, because I found myself a bit disoriented and motion sick exploring it as is. It’ll take me a bit longer to get my space legs. Reach also had to lock every block together to make the ring spin as intended, so you won’t actually be able to build or mine here. It’s a diorama, more than a playable world, but still extremely cool.

You can listen to a bit more of Reach’s process in his YouTube video below where he explains the challenges of engineering the ring, and the different decorative choices he made while building to give the entire thing a Halo feel.