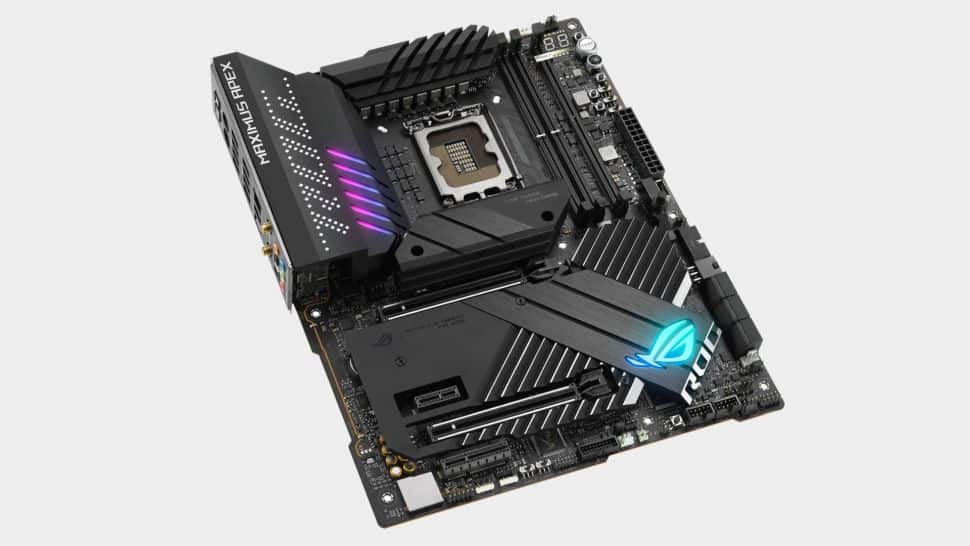 The OC-obsessed Asus Maximus Z690 Apex is one of the most expensive Z690 boards, though in fairness it sits a long way below Asus’ own Maximus Extreme. At $720 (£570, $1199 AU) there’s no getting away from the fact that it’s a very expensive board and its main competitors—the Aorus Tachyon ($550) and MSI Unify-X ($500)—both cost substantially less.

Motherboards specifically designed for overclocking have long taken a back seat in favor of RGB-ified gaming designs. Overclocking never went away, though, and though the days of taking a cheap processor and motherboard and overclocking it to flagship tier performance levels are long gone, it’s still good to see all of the big manufacturers still catering to the OC market, small though it is. Boards such as the Tachyon, Unify-X, and the Asus Maximus Apex are usually held in high regard, but these days they tend to come with a painfully high cost.

In better news, Asus has ditched the roman numeral nomenclature. This makes it easier to identify the board without having to google it. Instead of being called the Maximus XIV Apex, it’s now simply the Maximus Z690 Apex.

Before we get to the board itself, it’s worth mentioning the bundled accessories. Asus includes a PCIe 5.0 M.2 add in card, which adds a little bit of future proofing. As the M.2 slots on Z690 boards only support up to PCIe 4.0, it’s a nice value add for when PCIe 5.0 SSDs are a thing.

The card itself supports one drive. We expect PCIe 5.0 drives to get very hot, so the big chunky heatsink will definitely keep it running cool compared to a chewing gum stick sized cooler or strip of aluminium. Note that you’ll have to run the PCIe slots in 8x/8x mode to use the card.

The other notable inclusion is an innovative device Asus calls the ROG True Voltician. It’s essentially an oscilloscope device that allows you to monitor various parameters. It’s probably of limited use to a typical gamer—though you could say that about the entire board—but if you’d like to see what’s happening with your overclock, or perhaps troubleshoot a problematic device, it could be a useful tool for the super serious.

Now we come to the board itself. At first glance we’re not sure about the look Asus has chosen, particularly the large dotted ROG logo atop the I/O section. But it’s hardly a deal breaker. There are two RGB sections, one inside the main VRM heatsink, plus another ROG logo incorporated into the chipset heatsink. It comes packed with OC switches and buttons including various LN2 modes, slow mode, BIOS switch, and voltage read points. There are even moisture detectors that will let you know if your CPU or DRAM area is getting a little soggy.

The Apex contains one of the best, if not the best VRM designs of all Z690 boards

You’ll note that there are just two RAM slots, which is a common feature of OC boards where shorter traces, cleaner signals, and therefore superior DRAM overclocking is considered more important than maximum capacity. Adjacent to the RAM slots is Asus’ DIMM.2 M.2 slot, where you can install a daughter card with a pair of M.2 drives.

There are another two M.2 slots on the board, so when you add the one from the PCIe 5.0 add-in card, you get five M.2 slots in total. You also get dual PCIe 5.0 slots that operate at either x16/x0 or x8/x8. There are also PCIe 3.0 x4 and 1x slots for other peripheral component boards. As for the old school connections; there are six SATA ports and a total of nine fan/pump headers with additional water flow headers for custom water-cooling setups.

The Apex contains one of the best, if not the best VRM designs of all Z690 boards. A Renesas 24+2 Phase VRM with 105A stages means you have enough power on hand to insta-kill your Intel Core i9 12900K with all core AVX benchmarks at 2.0v or more if you really want.

The CPU might go up in flames, but the board won’t have an issue with it!

Asus equips the Apex with large and chunky heatsinks. We like Gigabyte’s finned solutions, which provide much more surface area, but the Asus’ sheer bulk is better than many. We saw a peak VRM temperature of 55c when running a 12900K at full load. Not bad. With decent airflow, cooling won’t be an issue.

The rear I/O features a strong USB complement with a total of ten ports; made up of a single Type-C 3.2 Gen 2×2 port, five Gen 2 ports and four Gen 1 ports. You get PS/2 keyboard and mouse ports, BIOS flashback and CMOS clear buttons, and a full set of audio ports.

Networking duties are handled by Intel i225-V and AX210 Wi-Fi 6E controllers. There are two schools of thought here. We do like to see 5 or 10G Lan these days on high end boards but is it superfluous on an overclocking board? Would WiFi 6 be enough? There’s a Realtek ALC4080 controller taking care of audio duties. If you need bells and whistles such as Thunderbolt 4 then you’ll need to look elsewhere. At this price such things could be considered standard, but as this is an overclocking board, we’ll partly overlook these omissions, as long as you don’t mind it too.

When it comes to performance, most Z690 boards perform quite closely to one another, as long as they adhere to Intel’s 241W PL2 power limit with a 12900K. Not that you should be running at stock with this board.

Ideally, we’d get out the dusty LN2 pot to take the Apex through its paces, but that’s hardly relevant to 99% of users. Our 12900K runs into cooling limits well before the board breaks a sweat.

What’s more important for Alder Lake and overclocking is how the board handles high speed memory. Our G.Skill DDR5-6000 test kit can hit 6,400MHz on the Apex, but it’s not easy and requires a lot of VDDQ voltage.  It’s possible we’re at the limits of our 12900K’s memory controller as we can’t hit any higher than 6,400MHz on a Team Delta kit that is XMP rated for 6,400MHz. Advertisement

The Z690 Apex will remain an OC favorite into the future, thanks to its frequent BIOS updates which incorporate feedback from many highly knowledgeable overclockers out in the wild. If you plan to grab a set of DDR5-6000+ and want to extract every last frame per second from your rig, it’s sure to have a long life ahead of it.

And it really is a high quality board, packed with OC friendly features. It overclocks memory extremely well—as you’d hope—and its BIOS feels very well refined given how early we are in the DDR5 era. But that’s not enough to earn my recommendation.

For me it still has to offer value as well. And sadly, that’s where the Apex falls flat. It’s really difficult to justify its steep asking price when compared to the Aorus Tachyon or MSI Unify-X. In fact if you took away it’s over-engineered design and the M.2 card, its feature list isn’t particularly impressive when compared to mid-range boards. It would seem to be a bit wasted with an air or AIO cooled CPU.

The Asus ROG Maximums Z690 Apex is likely to be a board that will have a long life as it will definitely receive ongoing BIOS support, and it should be perfectly happy with second generation DDR5, PCIe 5.0 SSDs, and a 13th Gen processor. For now though, in a market where any sort of notion of value is hard to come by, the Apex is a board that you should consider only if you already have an expensive CPU and very fast DDR5 kit to go with it. For the rest of us, diverting money towards other components is a far better way to gain extra gaming performance.