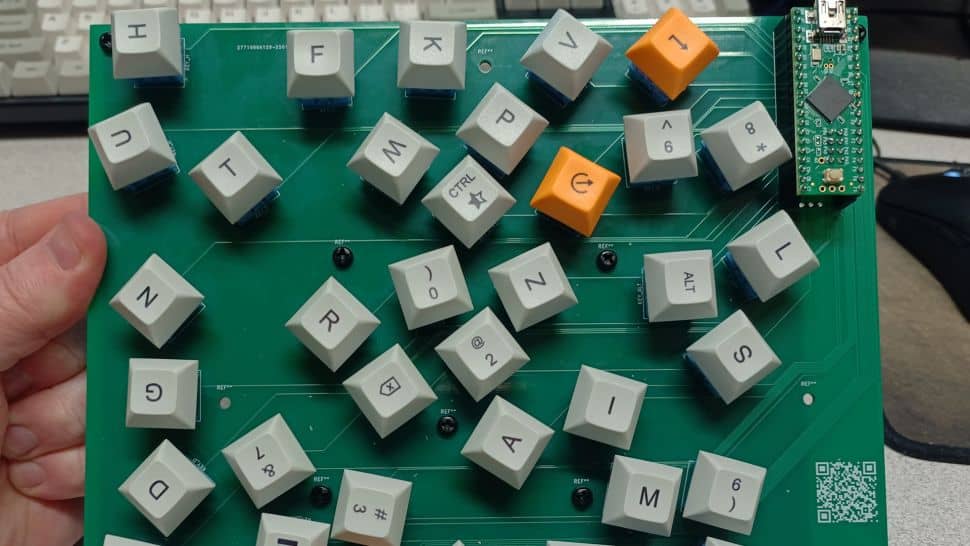 Foone Turing, better known as Foone on Twitter, thinks keyboards are too normal. If keyboards had difficulty sliders, Foone wants to max them out to nightmare. That’s why they made a physics-designed keyboard where the keys have been sprinkled onto a PCB and a tweet takes six minutes to write.

You know that person that pecks at their keyboard instead of resting their hands at it like most people do? Imagine intentionally recreating that experience and then imagine proudly sharing it with the world.

I asked Foone what their deal is with keyboards.

“So I have a hobby of making terrible keyboards, this is just the latest one in that series,” they said. It turns out, Foone has gotten away with this many times before, which maybe is unsurprising since they’re also the person that put Doom on a pregnancy test. They’ve made everything from a keyboard that has to be toggled with binary, to one that requires floppy disks inserted for every letter, and one that is GPS-based—for some reason.

Foone detailed the entire process of making the physics-designed keyboard in a lengthy Twitter thread. It started with a program that jumbled the keys up. Then, they had to make a PCB that would support keys in various rotations and find even-shaped keycaps. It took a few tries to get it right because Foone kept finding certain symbols weren’t available in the drivers they wrote and that the PCB warped over time. Despite the issues, Foone was able to record a six minute video where they type on it.

“I’m trying to type function+6 [in the video], but I type function+9 instead, because guess what? The 9 is upside down from where I’m sitting,” they wrote.

Foone told me that, despite what you may think after seeing this monstrosity, they are a QWERTY layout fan and a normal keyboard user. Their keyboard antics are, in part, to make mechanical keyboard nerds squirm.

“I often joke about ‘trying to make keyboards so terrible they make /r/mechanicalkeyboards users explode at 20 paces,'” they said.

This “historical beef” with the mechanical keyboard community began with one user popularizing a method of taking retro IBM keyboards, ripping the guts out of them, and turning them into cheap, modern mechs. This poses a problem for Foone, who has old IBM PCs that need keyboards with the original components to work.

“Thanks to a bunch of mechanical keyboard geeks trying to save some cash, I can’t get them, as they’re now expensive and usually pre-modded, and modding them makes them useless to me,” they said.

Thus, Foone has no plans to stop their keyboard crimes, or experiments as they’re more accurately described.

“I’ve definitely not made an illegal keyboard yet,” Foone said.

Before I let them go, I did pitch them on a keyboard made of ice, where you lose functionality over time. It’d be a race to get your words out. Keyboard “any%” speedruns could become a thing.

“Ice is a good idea,” they said. “I seem to remember I was experimenting with something relating to ice but never got anywhere. Probably as a variant on the touch-sensitive idea, because ice is conductive so you can make a capacitive sensor out of it.”

I’ll be waiting for the ice-board updates on Foone’s Twitter. For now, I’m trying my best to forget watching six excruciating minutes of the most chaotic keyboard I’ve ever seen.