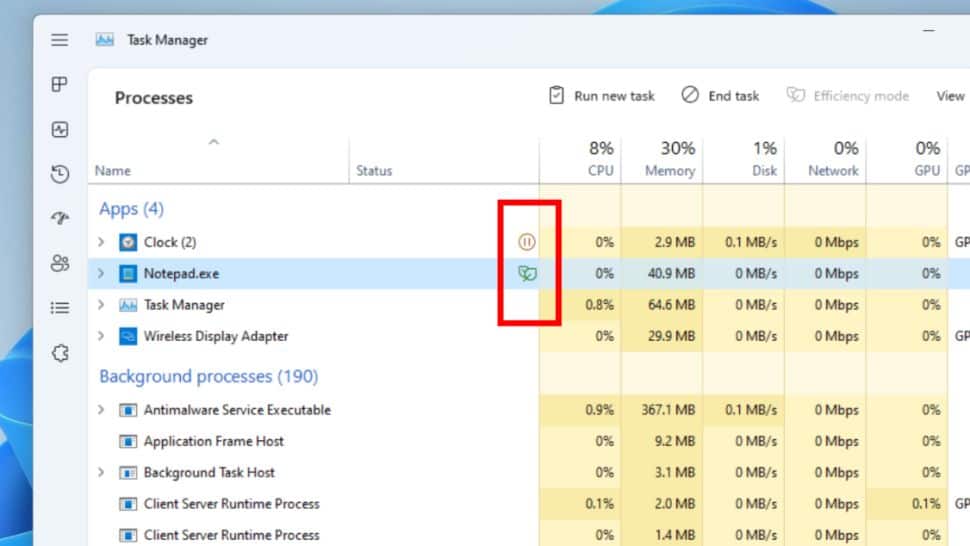 The Task Manager is finally receiving a makeover to match Windows 11. Microsoft has put a new lick of paint on the ol’ task manager with its new Insider build, and alongside a new look it’s rolling out its new Efficiency Mode, which will help keep greedy apps from gobbling up too many resources.

Let’s start with Task Manager’s new threads, which come as Microsoft appears to be gradually giving Windows 11’s age-old apps the treatment they really should’ve had at launch. Windows 11 really was only skin-deep at first, but now it’s starting to feel like its own operating system apart from Windows 10.

Microsoft has rolled out the ‘hamburger style’ navigation bar for the Task Manager, which basically means a stacked menu on the left-hand side of the window. Alongside that it’s added some common actions to each page in the top-right.

Most importantly, the Task Manager will now match the theme of Windows 11. So if you’re rocking dark-mode, and you should be, you won’t be suddenly blinded in the middle of the night when you go to end a crashed window’s existence once and for all.

Then there’s the new addition of Efficiency Mode, which comes as a follow-up to a wider eco-friendly push with Microsoft’s latest OS. Windows 11’s Task Manager will now offer the ability to turn on Efficiency Mode for specific program processes which will limit the resources available to it.

Microsoft says this will “lead to faster foreground responsiveness and better energy efficiency.”

Sounds like a handy option that saves ending any demanding tasks when they’re not in use, which is what you have to do now. I’m already excited for that moment when I can tell a Chrome tab to stop hogging all the resources for once.

Microsoft is also introducing new PC idle settings by default with this update, though only for clean installs of the OS. It says these will help reduce energy consumption and carbon emissions. Your OS will even tell you off for having Sleep and Screen off set to Never.

If that’s the case, the Power & Battery settings will feature a box that says you’ll decrease battery life and end up with higher carbon emissions.

For all these updates, you’ll first need Windows Insider build 22557 or later, which is on the Dev Channel. You may not find all these specific changes in place yet, however, as Microsoft is still working on the Efficiency Mode stuff and is rolling that out depending on how well it goes down with the select few that have it.