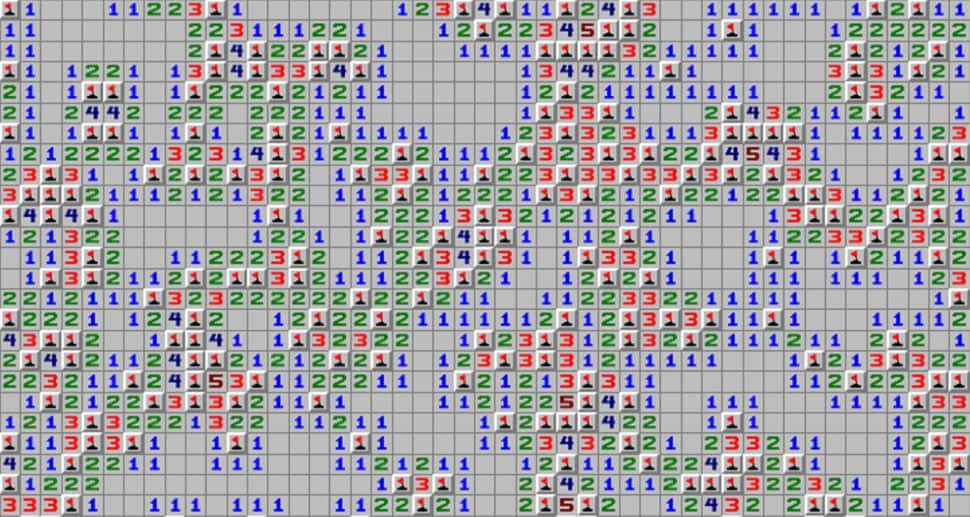 If you’ve ever booted up the puzzling classic Minesweeper for a quick game, then found yourself sweating as your first click reveals a big red 3, then you’ll have some appreciation for the achievement of reddit user OtterDeity, who successfully cleared a 99×99-square sized Minesweeper board, flagging a whopping 1,500 mines in the process.

OtterDeity posted a screenshot of the completed board, which you can see below. Describing the experience as “nerve-wracking” OtterDeity states the board took him “about 2.5 hours” to finish, which to me seems pretty fast for such a massive board, though naturally some commenters disagree.

A gaming staple since 1992, Minesweeper sees players attempting to deduce the location of a set number of “mines”, using numbers revealed by clicking on a tile, which tell you how many mines are in the squares adjacent to that tile (but not where they are) A typical Minesweeper board will be around 15×20 tiles in size, giving you an idea of just how big OtterDeity’s completed board is: You can see it below.

The post has quickly garnered a lot of attention, receiving almost 200k upvotes over the last four days. Various Minesweeper-related debates also ensued, the most interesting of which involves commenters judging how much guesswork was involved in solving the board, leading into a bigger debate about how far deduction can take you in Minesweeper.

User Javop kicks off the debate with “Maybe none. Normal expert mode has about 20% [of the board] mined and this has 15% mined.” Hence, they claim, it’s “unlikely” that you would encounter situations where the chance of clicking on a mine is exactly 50/50. User nonstopdrivel counters with “No matter how well you reason out your choices, there always comes a point at which you have to take a deep breath and flip a coin.”

QuantumPolagnus claims to have crunched the numbers, stating the board is around 15.3% mined. “If you take a closer look at the cleared board, there are a lot of big open areas where they would be able to work around an area and be able to logically solve it instead of having to guess.” QuantumPolagnus then attempts the same size puzzle, but “screwed up” after twenty minutes. “I have to admit, there were some sweaty palms going one board for that long,” they admit.

Not everybody was impressed by OtterDeity’s achievement. Masterzergin says” This is very low density and a solve rate [of] 1 mine every 6 seconds”, while jimmyshampoo posts an image of a same sized board with 2,000 mines that they claim took them “25 minutes”. Not that they’re boasting.

Given it would take me two hours to finish a board a tenth of this size, it seems like an impressive feat from where I’m sitting. OtterDeity’s success has also made me want to spend my lunchtime clicking tentatively on tiny grey squares. If you feel the same way, you can get your sweep on through a whole range of free Minesweeper games online, including this one, or by downloading Microsoft’s latest version of Minesweeper from the Microsoft Store.