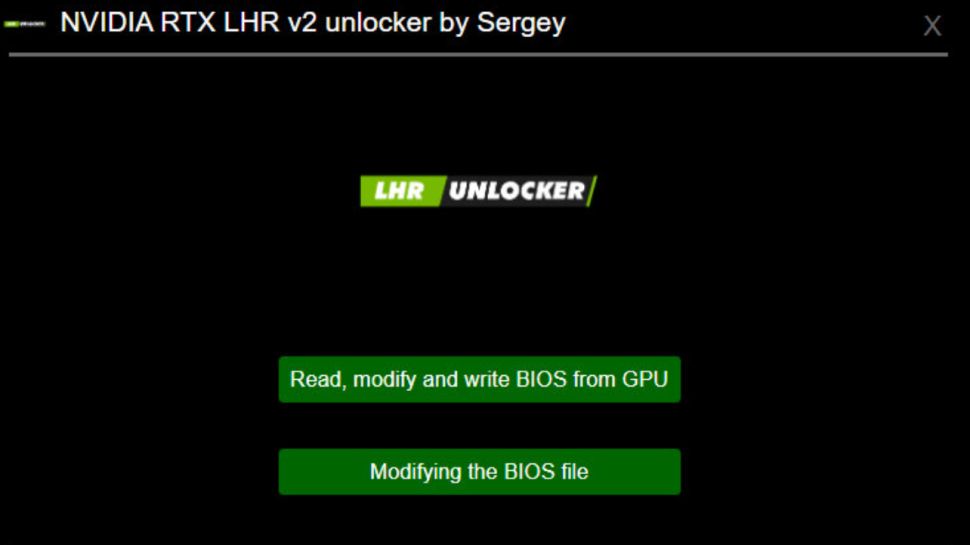 Nvidia’s Lite Hash Rate limiter might be toast. New unlocking software is reportedly able to free the full mining capability of Nvidia’s RTX 30-series graphics cards, meaning miners will once again be able to use these GPUs to their full potential when mining Ethereum.

Nvidia’s mining limiter was introduced this time last year as a way to restrict the hash rate of RTX 30-series graphics cards while mining Ethereum. It did this by lowering its hash capabilities by nearly half when a specific mining workload was detected.

Technically, Nvidia’s LHR has managed to hold fast despite a year’s worth of efforts to mitigate it by miners (and once Nvidia itself). Though there are ways to bypass the limiter partially—some miners even believed it to be ‘pointless’ following these partway measures—though it’s rendered even more pointless now that it’s been bypassed in its entirety.

According to MyDrivers (via Videocardz), the Nvidia RTX LHR v2 Unlocker from Sergey is able to modify Nvidia RTX 30-series BIOS and drivers in such a way that it no longer lowers the hash rate whatsoever when ethereum mining is detected.

The tool is not fully out yet but is planned for February 26, according to its Github page. An early access version is currently available.

The tool itself flashes a modified BIOS onto Nvidia graphics cards and is said to even make a backup of the BIOS should something go wrong. Also required for the modification to work are custom drivers downloaded from a private server, which will likely render a card installed with a modified BIOS useless for much else than mining.

Though it’s unlikely they’ll ever be used for much more that making money. Being reversible, though, this solution may appeal to cryptocurrency miners that will want to flip these cards on the second-hand market later in life.

So once again we’re looking at a situation that’s far from great for PC gaming. Though miners aren’t having a great time of it either right now. Following a period of sustained highs, ethereum’s value has recently plummeted. The cryptocurrency is also the most popular for GPU mining, but is planning to shift to a proof-of-stake algorithm that will render mining obsolete. That was meant to happen last year, though, and still hasn’t.

Many cryptocurrency miners will be keen to unlock their mining cards’ full potential with this tool, though they may also be cautious to investing in brand new GPU stock while uncertainty for ethereum mining’s profitable future remains.

As PC gamers looking for affordable graphics cards, we’re not out of the woods yet, but I’d like to think there’s at least a glimmer of light at the end of the tunnel in 2022. Nvidia expects supply to bounce back later this year, too, which is when we may actually see the GPU market come crashing back down to Earth.