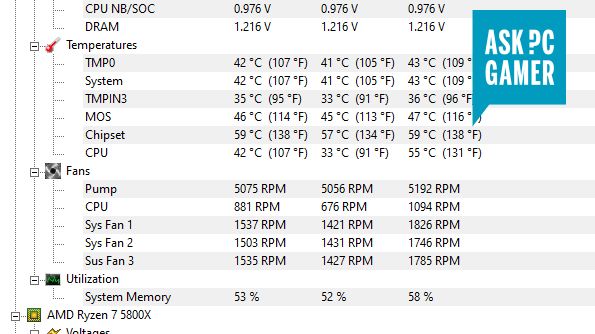 If you have a need for fan speeds, clock speeds, flow speeds, and more information about your gaming PC on your desktop then you’ll want the best system monitoring tool. My recommendation for that is HWMonitor—there plain and simple. Though I’d also like to bring up a lesson I’ve learned over the past few years of professionally tweaking with PCs: sometimes you’ve got to let this stuff go.

First, my recommendation: HWMonitor is fast, simple, logs all the information you could need out of it, and keeps track of every PC vital stat you could reasonably be after.

You can also save the monitoring data if you needed it to be logged for whatever reason.

HWMonitor is a simple package that does what it says on the tin. You don’t get any fancy features, nor any built-in control to do anything with the data it presents you. But that’s sort of what I love about it, it gets a job done and it does it really well.

Another system monitoring tool worth mentioning, and in keeping with the spirit of minimal fuss, is Windows’ own Task Manager. The built-in tools Performance tab offers a lot of data nowadays without the need for any third-party tools, and it’ll even report your graphics card’s temperature.

I’d also like to give an honourable mention to the old hand that is MSI’s Afterburner software. While it’s effectively more of the same by way of monitoring, the handy GPU overclocking tools and live graph presentation really aid in easily understanding the monitoring data presented to you over time. That helps when you’re doing some actively to the system and wish to monitor the impact those changes have in real-time. Such as overclocking, for example.

Though what I’ve never been a fan of are the all-in-one manufacturer specific system monitoring tools, and that’s why you won’t find me recommending any here today. There are tons to choose from, every manufacturer has one, basically, but they all achieve something along the lines of system monitoring with a few added extras along the way. Those added extras are normally always to do with proprietary lighting or features on the manufacturers products that you might not be able to control easily elsewhere. So sometimes you’re a bit stuck with one of them.

Even I’m stuck with a few of them and I’m not all that pleased about it. Though you might find you can get the same functionality from third-party tools such as OpenRGB. That is a bit of an all-in-one open RGB control app that not only simplifies the many apps you have to install and keep up-to-date, but also allows you to then ditch the proprietary monitoring software for something simpler.

Now onto my second recommendation: maybe you don’t always need to keep an eye on your PC’s every electrical action. I used to be really obsessed with checking my temperatures and fan speeds, like annoyingly into it, and while I’m sure not everyone is going to want to to check their PC temps mid-game, I sure did. For a time, anyways.

Nowadays, I tend to monitor my PC a little less. When I swap a component out, sure, I’ll check the new kit is working as intended, and if I swap my PC case I’ll keep an eye on temperatures. Though now when I’ve got a good view of what’s going on there, I let sleeping dogs lie after that. Your PC is pretty great at regulating its own chassis temperature, and if your components were really getting too toasty, you’d know about it before any harm was ever done.