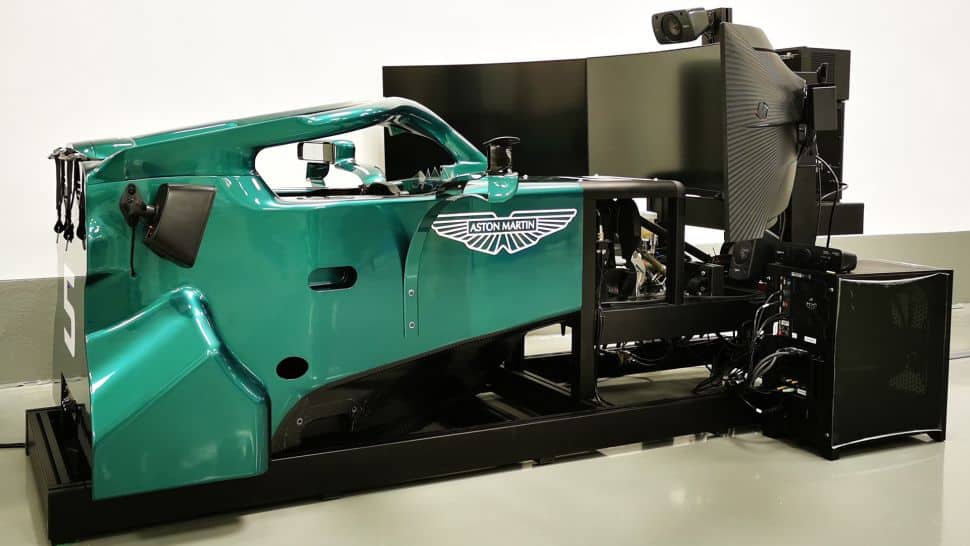 The sort of simulator used by Formula One teams and their drivers are world-class. They’re massive rooms with control panels, feeds from every angle, terabytes of data being beamed to engineers that use that information to inform their development of the real-world car. I wish I could show you a picture of the one I visited a few years ago, but I can’t—these teams have their simulators on complete media lockdown.

But what is an F1 driver to do when they’re not close to their team’s world-class F1 simulators? The team brings the simulator to them.

The Aston Martin F1 team has just released details of an F1 simulator they’ve dropped off at the house of four-time World Champion Sebastian Vettel, and it’s seriously gorgeous. Its most striking feature is the replica AMR21 chassis making up the basis for the simulator cockpit—a dead lookalike for the chassis used by the team in the 2021 Formula One World Championship.

The cockpit is made up of Vettel’s own race seat, headrest, and seatbelts from the 2021 championship. The wing mirrors, steering wheel, and headrest all match the real deal, too.

Direct in front of the cockpit sits three massive monitors, hooked up to a powerful gaming PC. Apparently a two-screen version “proved limiting”, which makes me assume a modest budget wasn’t a determining factor in the design. There’s bound to be some serious graphical power inside that PC to ensure those three screens are able to keep up with a World Champion’s driving ability, but we’re sadly lacking specifics. No doubt there’s a high-end graphics card in there, an RTX 3090 or RX 6900 XT.

There’s a slew of Logitech speakers surrounding the cockpit for immersive audio—though I doubt anyone’s racing at home with the volume set to match the roar of the V6 Turbo Hybrid engines used in F1 today.

Even the metal frame that holds it all together has been custom shaped for this sim rig alone.

My only criticism of the entire build is that it appears the tempered side glass of the PC is still covered in the plastic. I sure hope that’s not still the case now that it’s occupying space in Vettel’s own home.

The design of the sim rig started in April 2021, led by senior garage equipment designer Matt Tomalin. Pro Sim, a simulator designer and manufacturer, helped put together the wheel feedback system and calibration of the brake pedal to mimic an F1 car’s real response.

“In such a global championship, logistics and time constraints can make simulator time tricky to accommodate, so the home simulator offers Sebastian the chance to get into the zone ahead of Grand Prix weekends,” a blog post says.

All in, this simulator lives up to F1’s expensive tastes and expectations. These top F1 teams don’t do anything by half measures, clearly, and even with a cost-cap now in place to create a budget ceiling, rarely is an expense spared when it comes to extracting top performance. While there’s not an exact price attached to this sim I shudder at the thought of how much it costs.

I’m also trying not to feel put out by the fact my at-home racing sim rig is a wheel that I can barely fit between me and a chest of drawers and some pedals held in place by a block of wood. Though I must admit my lap times aren’t exactly world championship material.

How much a high-end simulator will help in the coming season, only the pros can say. Vettel has had a few jokey words to say about his preparation for the coming 2022 season, which begins this weekend and will see major changes to all the cars on the grid in line with sweeping new regulations.

“Maybe it’s better to jump on the city bus rather than the simulator before the race to get the preparation done,” Vettel said to reporters in Bahrain (via PlanetF1). Advertisement

“The cars now are different. The first thing that stands out is the weight, the cars are a lot heavier, it’s just more inertia, more mass, so therefore the driving has to adapt.”