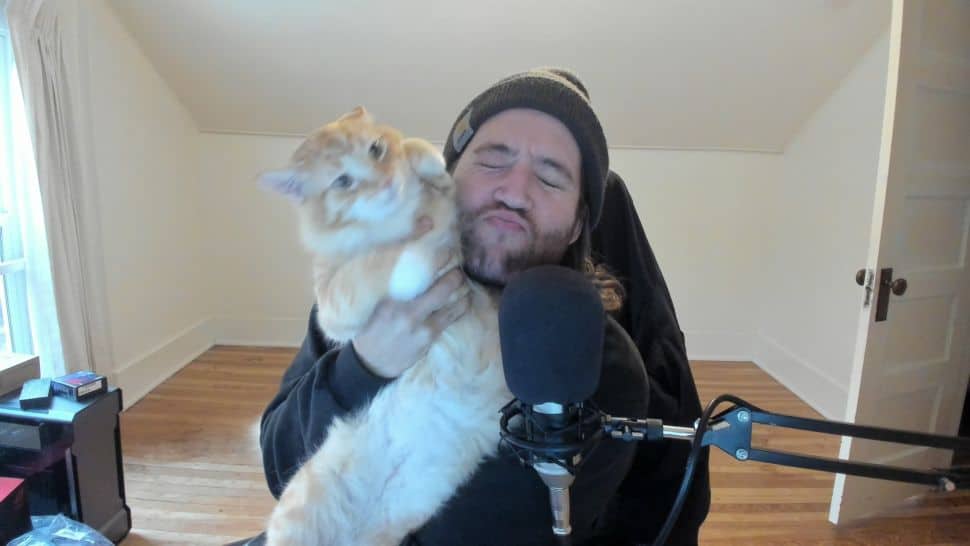 A tangle of Christmas lights twinkle on the mantelpiece behind a man who is reading the new Ruth Ozeki book aloud. For reasons I will never understand, he has decided to spend this bleary winter morning narrating the book to his webcam, live on Twitch. I am the only person watching, so currently, he’s carefully navigating the plot for an audience of one.

I would’ve never crossed paths with this reader if it weren’t for Nobody.live, a web art project that dredges up viewerless broadcasts from the subterrestrial layers of Twitch. Log on and you’ll be paired with Halo deathmatches, Dark Souls speedruns, and Madden blitzes that have been emanating into the ether like unanswered phone calls. Pick up, and the spectator count will change from zero to one.

It’s possible to become fabulously rich and famous as a professional streamer. Tyler “Ninja” Blevins is currently playing Fortnite for 15,000 people; Imane “Pokimane” Anys earned multiple cameos in Free Guy; Turner “Tfue” Tenney has over four million Twitter followers and his own streetwear line. But Jack Kingsman, a musician, programmer, and the creator of Nobody.live, is far more interested in the strange, exotic hinterlands of Twitch—the many, many people who stand on this stage built for public performance and talk to no one but themselves for hours on end.

Forget all the splashy esports tournaments and their many sponsors: Kingsman believes that livestreaming, as a medium, is most interesting when the tender privacy of someone speaking to you from their bedroom is felt.

“I’ve always loved theater, and last November was a mental low point for me with the pandemic. I was locked down and far from my friends and dealing with acute loneliness,” he says, describing his inspiration for the site. “I thought it was a beautiful idea to take someone who was essentially performing to an empty theater from no viewers, to one viewer. It’s a validation of their art and it lets you step into that art and participate yourself.”

Nobody.live wasn’t hard for Kingsman to build. “Twitch has a great API and fantastic documentation,” he says.

“I wrote a little script that says, ‘Hey, give me a list of all your streams,’ and then it flips through those until we hit some with zero viewers,'” says Kingasman. “There’s never a short supply, proving that we underestimate the sheer number of novice creators putting themselves out there for anyone to find.”

Twitch is primarily marketed towards gamers, so Nobody.live retrieves a lot of broadcasts beaming out the most omnipresent franchises: Grand Theft Auto, FIFA, and Call of Duty. These streamers often do not seem to be aware that they’ve pressed the broadcast button. But Nobody.live is at its best when it turns up idiosyncratic streamers who are selflessly sacrificing their bandwidth to share their outré passions. The man who mesmerized me with his novel is just the tip of the iceberg. In my journeys, I’ve seen a steady cam focused on a 3D printer huffing and puffing through a challenging blueprint and a duo of high-schoolers fucking around in the middle of math class under their teacher’s nose.

It is like flipping through the arctic regions of cable; you never know what you might find.

“I’ve gotten people who are having a really hard night and are just streaming in their cars hoping someone will talk to them,” says Kingsman. “I’ve gotten Russian university students in the middle of an electrical engineering lecture. I love the dice roll of it. It makes me so much less lonely when I need it.”

For Kingsman, Nobody.live is not a passive institution. The spectacle of livestreaming demands engagement, which is why the chat box is embossed on the bottom right corner of the screen. Twitch babble is typically chaotic; venture into a top streamer’s lobby and you’ll see zillions of emoji-speckled messages zoom by in a nanosecond with no chance of getting a word in. But here, in the serene underbelly, you can reliably unfurl long, rambling conversations with whomever you meet at the crossroads. It brings to mind one of my most cherished childhood rituals: bantering with a friend in the dead of night, rubbing the sleep out our eyes, as one of us tries to solve the Water Temple.

Gaming can be an intimate experience, and there are moments on Nobody.live where I feel like I’ve committed some sort of taboo, like it’s somehow wrong for me to be watching from the shadows as someone earns an ace in Counter-Strike. I think that’s my favorite thing about the project. Social media’s daily discourse soup can be frequently depersonalizing, and after being tugged in every direction, by every agenda, to the point of doubting reality itself, it’s oddly comforting to be starkly alone with a stranger on the internet.

“It’s awkward, strange, and uncomfortable at times,” says Kingsman. “There are times when I hop on a stream and start talking to someone and I realize that it’s surprisingly more social interaction than I was expecting. It’s high-contact and voyeuristic.”

Kingsman says he keeps up with a rolodex of acquaintances he’s made through Nobody.live—random streamers who he broke bread with on those interminable high-pandemic nights. Some of them are beginning to see returns on all of their hard work, growing beyond total solitude to five viewers, and then 15 after that. Modest growth, but better than nothing.

They no longer appear on the site, of course. Nobody.live remains exclusive to the optimistic beacons who whose signal hasn’t been picked up yet. For as long as the site is up and running, the denizens of Twitch can keep hope alive that someday, someone will turn that zero into a one.