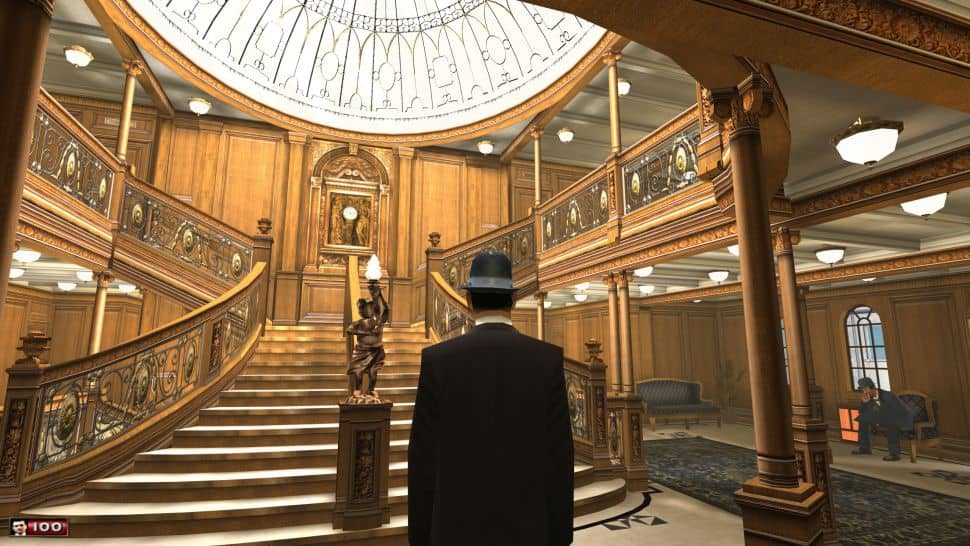 As mods go, they don’t get much bigger or more ambitious than this one: a full recreation of the RMS Titanic… and it’s a mod for Mafia. In 1912 the Titanic was the biggest passenger ship ever built and, as I’m guessing you’re aware, it sank on its first voyage from England to New York. There was a pretty major movie about it in 1997 (but there was a far better movie about it in 1958).

Of all the games to add the Titanic to, I never would have guessed Mafia would be a good fit, but it really is. The full-conversion mod project has been underway for more than a decade, and it’s important to note it’s not finished. The version I played was just part one of an even bigger planned mod. But what’s there is playable, and if you enjoy Mafia or just want to explore a beautiful and impressive recreation of the Titanic, this is a mod you should absolutely try, even in its unfinished state.

The Mafia Titanic Mod comes with a custom storyline (also not yet finished), and it begins not with an ocean voyage but with a test of your driving skills. Your mafia don wants to transport an expensive car on the Titanic and sell it overseas, so before you can climb on board the historic ship you’ve first got to drive there. And you’ll need to be careful. The old timey car can’t take too much damage and neither can you or your passengers. If you’re a Mafia veteran, you know the cops won’t put up with you speeding or running red lights, either. So drive carefully and buckle up, because it’s quite a lengthy trip.

In fact, after carefully navigating a countryside map and entering the city, I got a bit lost. I guess I’ve been a bit spoiled by years of games giving me a constantly updated GPS route and navigation markers all over my map. But here I had very little idea of where to go. The country map provided some floating green arrows showing me where to turn, but when we got downtown I had to bring up the in-game map and just drive around enough for it to show me where the Titanic was berthed. Clever me: I figured it would be somewhere along the coast.

There’s a bit of educational value in the mod, too. One of the mafia pipsqueaks in the car dished out a fun fact about the Titanic. “That’s a big ship!” he exclaimed. And, of course, it is. After parking and having the car loaded aboard, I stood there just looking at it for a while, watching the crowd on board and the crowd on the dock waving excitedly at each other. As for me, I won’t be travelling in steerage like some common Jack Dawson. I have a first-class ticket, so I’ll be riding in style.

Me and a fellow mafia goon climbed on board and were told to locate our rooms on B deck. It took quite a while to find them, because this floating hotel is massive. But every deck is nicely marked and we eventually wandered into the right set of corridors. Once inside the room, I admired my classy quarters, then found a suitcase in the closet that let me change outfits. Suit and top-hat? Pajamas? Old-timey swimming costume? I can take my pick. And since I’m in the mob and all, I also have an even bigger suitcase full of guns to choose from. Well, maybe I’ll play with those later.

Some cutscenes show the ship leaving port, and once again it’s driven home: this is a massive ship. I know there are bigger ships than the Titanic in the world these days, but jeez. This ship is an absolute unit.

From there I was free to explore and partake in a few different activities. And honestly, the only real activity I needed for about an hour of playtime was just walking around, exploring the Titanic, and gawping at just about everything I saw. It’s a really astounding recreation. The elegant, sweeping stairways, the corridors that seem to go on forever, the classy parlours filled with dapper gents and a smoky haze from cigars, the massive and crowded dining rooms, the outdoor walkways that let you amble along from the stern to the bow. It’s seriously impressive and looks amazingly accurate. I can see why the mod has taken so much time to go from idea to reality.

After quite a lot of wandering, and sometimes just finding a spot to sit and stare for a while, I eventually walked to the very front of the ship. I had to do it, right? Unfortunately, my ‘King of the World’ moment wasn’t quite as exciting as it could have been. I sort of just stood there. I did spot another passenger near the bow of the ship, and he was wearing a flat cap. Is that Jack? Could be Jack. Either way, I punched him a few times. That’s for becoming a permanent fixture in our collective pop-culture consciousness, jerk!

While the mod is still unfinished and once you’re onboard there are no more story elements to play with, there’s actually a lot on the ship that works. To have dinner, I first needed to make a reservation with a desk clerk on a certain deck. After dinner, I had a glass of scotch in the parlour, sitting amongst the other fancy blokes. There’s a pool down belowdecks, and I paddled around in it for a bit in my swimming costume, then poked around and found an attendant who offered to wash me. It was weird, but I accepted – I’ve been trained by Red Dead Redemption never to turn down the offer of a personal bathing attendant. I also climbed into some contraption that looked like an iron lung but I assume was some sort of personal sauna. It seemed like every door I stuck my head through on the ship had something interesting behind it. I even sat down and played the piano for a bit, and a fellow walked up and danced a little. When I finished, a small crowd had gathered and gave me a little applause.

I wandered up to the front of the ship again and this time found the fellow steering it. It’s hard not to want to steer the Titanic myself, so I punched him a few times and he ran off. I couldn’t turn the ship around, but I was able to blow the massive ship’s horn, which is maybe the loudest horn I’ve ever heard in a game. It was fun! Just for kicks, I punched the captain, too, but he promptly pulled out a revolver and shot me. I guess he’s a little on edge, and it’s tough to blame him.

Since I was punching innocent people anyway, I figured I might as well go full mafia psycho, so I went back to my cabin and loaded up on guns. It does feel a bit grim to be shooting up a ship full of people about to experience an absolutely horrific tragedy, but don’t you worry. These Titanic passengers aren’t going to sit there helplessly while you go ham on them. Some fled, screaming, but I was rushed by a whole crowd of angry passengers, who pummelled me mercilessly. Even the members of the Titanic’s band rushed me and started beating on me with their violins. That’s a tough little orchestra.

In fact, I didn’t last long no matter how many weapons I brought to the party. Part of it is the clunky aiming in the 19-year-old game, but most of it is just that NPCs have no interest in putting up with random violence from a mafia goon without dishing out some justice of their own.

I gave up on the guns pretty quickly and without any second thoughts. The Titanic is a perfect pleasure to experience without running around and shooting up the joint. The mod is highly detailed and as much as I walked around its various decks, talking to people when I could, and interacting with its various activities, I’m sure I didn’t even come close to seeing everything that’s there. It’s a massive place.

Like I said, the Mafia Titanic Mod is far from being complete. It’s mostly a sandbox. Part two of the mod will add more finished areas of the ship’s interior. Part 3 will feature the actual sinking of the Titanic, which I am definitely interested in experiencing. And Part four will deal with what comes after. If you decide to try the mod, just keep all that in mind. I certainly can’t wait to try it again when it’s finished. It’s already a mod to remember.