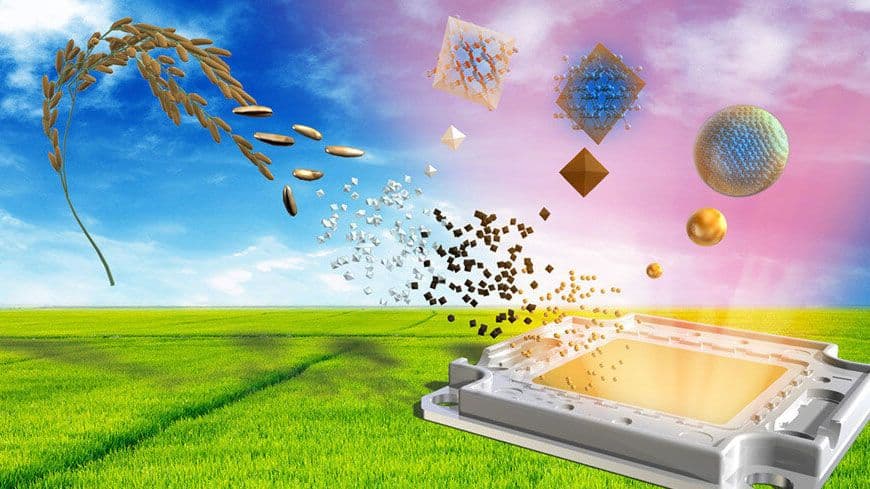 Scientists in Japan have developed a process that aims to minimize toxic materials used in producing Quantum Dot (QD) LEDs. In the same stroke, the research team based at the Natural Science Center for Basic Research and Development at Hiroshima University found a way to make good use of many tons of agricultural waste.

“Since typical QDs often involve toxic material, such as cadmium, lead, or other heavy metals, environmental concerns have been frequently deliberated when using nanomaterials,” explained Ken-ichi Saitow, lead study author and a professor of chemistry at Hiroshima University, to Tech Xplore. “Our proposed process and fabrication method for QDs minimizes these concerns.”

It turns out that rice husks can be processed as a good source of porous silicon. This non-toxic material can be used in a wide variety of applications. With more devices than ever come packing screens and the public moving towards widely adopting LED lighting, it is becoming more popular than ever. Additionally, quantum dot technology monitors can produce some of the most stunning visuals available.

So, how do the scientists make the high-purity SiO2 and value-added Si powders from leftover husks once the rice is milled from its shell? They kindly shared their method, which we have condensed and simplified below.

After the above processes have been completed, the scientists are left with Si QDs that luminesce in the orange-red range with good efficiency levels.

As with many of these cutting-edge technological discoveries which we feature in the news, there is still additional research and refinements to be completed before commercialization. In particular, the scientists aren’t satisfied with the efficiency of luminescence of the first Si QDs and LEDs made with rice husk-derived materials. Moreover, they want to look at tuning the Si QDs for light spectrum responses outside of the orange-red zone.

Interestingly, the research team is also going to look at other agri-waste from silicon -rich crops like sugar cane bamboo, wheat, barley, or grasses. Perhaps the Si QDs derived from these other crops will naturally have different luminescence characteristics.