👉 If this page is confusing or if you need to speak to us, please don’t hesitate to get in touch with us.
We are confident we can help you with your needs. Just click the SOS button!

Here is why you may need an SSD Upgrade instead of a whole new computer:

And this one is my favourite:

Most people we speak to approach us because they want a new system. This is great, because we sell them! However, we are all about solutions and finding the best solution for our customer. You. In some situations, some people have come to us with a laptop or computer that is only 6 months old, they spent $1000+ on it and already it is running terribly slow. They come to us expecting to have to buy a new computer but when we look at what might be wrong we can clearly see why.

Take a look at this screenshot – see if you can spot what is wrong: 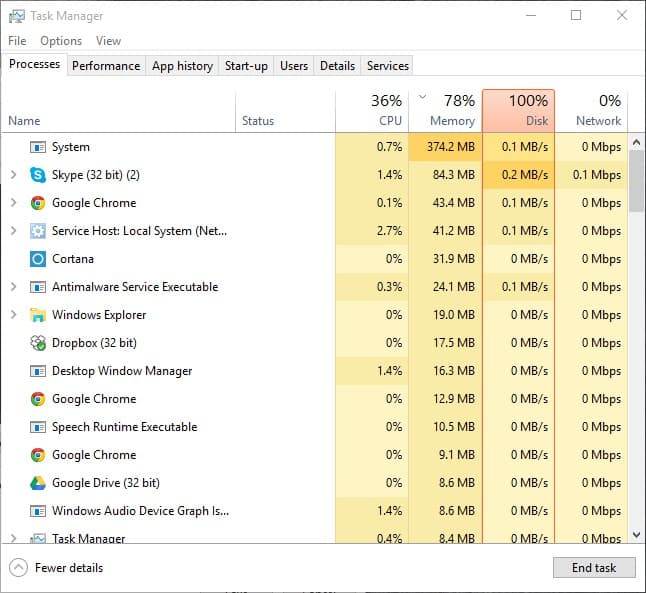 You guessed it! The disk is constantly at 100% usage. This is a problem. But if you look down that same column – there is no one thing that is hogging it all to itself. It all seems fairly relaxed in that column yet it is sat at 100% disk usage.

So why? Well, there are two ways to answer this one. The non-tech mumbo-jumbo way and the bla bla jargon way. Which one are you?

Your computer is using your old clunky hard disk for temporary storage. Windows 10 in particular is bad for this – it punishes older hardware. Installing an SSD is much much faster so it will basically get rid of this issue.

Hit me with the gory details

Your RAM is super fast volatile storage but your HDD is slow mass-storage. Windows uses RAM where it can but the mass storage contains all of the long term data so undoubtedly it needs to access the HDD to find the data and place it into memory. This is especially apparent when booting the system. Think of all that code for all those start up applications stored on your mass storage device and Windows is trying to find it, read it and pass it through to the RAM. It basically cannot cope.

Windows 10 is designed for SSD drives. It utilises some neat little tricks when it detects mechanical hard drives using such techniques as the Superfetch service to try and alleviate the issue but at the end of the day, it is like trying to evacuate old people from the crashed bus so they can get into the rescue sports cars. What if the old people were young kids, mid-sugar rush from eating lollies, and the bus was a bullet train? that is what an SSD is in comparison in our (silly) analogy.

SSD drives don’t need to seek data the same as a mechanical hard disk does. As the name suggests, a mechanical is made of magnetic plates and a big magnet to go looking for those tiny bits of data. It spins fast to speed things up but storage is so large these days it is like looking for a needle in a haystack. SSD’s on the other hand doesn’t need to find it with ‘feeling’ its way around, it already knows where it is. Its like it is psychic or something!

We have found time and time again that slow computers are completely revitalised when we swap out their old hard disk for an SSD upgrade. Back in the 90’s and early 00’s it was all about the RAM upgrade that made the difference to a computer. Well these days, times have changed and we have seen a lot of systems struggle because of their mechanical hard disk is holding them back. Sure if you are running with anything less than 4GB RAM then we would be recommending upgrading the RAM also but if you are 4GB or over then it is more likely your hard disk that is the bigger issue.

What is an SSD drive?

SSD is an acronym for Solid State Disk. It is essentially like a large USB Flash drive in that there are no moving parts inside. It is made up of chips and a small circuit board. None of which need to move at all. This makes it great for laptops as mechanical disks (old disks that do have moving parts inside) are notorious for failing in laptops. Laptops get dropped, knocked etc. so having your storage on something that is moving whilst you bash it around is not a healthy practice. Try telling that to your kids though!

Just like a flash drive you can store all of your files on it and it stays there for as long as you need it. And because there are no moving parts, there is virtually no ‘seek’ time when the system looks for data. It doesn’t need a motor to spin up to its optimum speed, move the mechanical arm across all the metal platters and then go looking for the data it needs (a bit like a high tech vinyl record player).

The result is a hugely improved user experience as data flies to and from where it is going. The disk usage goes down to 0% within seconds of booting up Windows instead of minutes.