The AMD Home Computer is a smart choice as it offers the best performance for your buck.

The AMD Home Computer features built-in Radeon™ Vega graphics with FreeSync™ will take you online gaming experience or movie streaming to the next level. This custom-built desktop system for home use offers premium performance at the best value. Its innovative processing power is fit for all types of modern workloads. If you think you need more power, the memory on this system could be upgraded to 32 GB.

If that isn’t enough, then you can change out the processor for a more powerful model and add in a discreet graphics card to really level up your gaming experience. Whether you are a home user, a worker, a video editor or a gamer, this PC will help you do more, for less.

Tell us what your expectations are and what your workload is like, so we can help you choose the right components. Other upgrades include but are not limited to fast SSD1 addition, optical drive and Windows 10 Home edition.

Get the right combo for you needs to have a home system that will stay up to speed for years!

The rich entertainment experience you expect from AMD 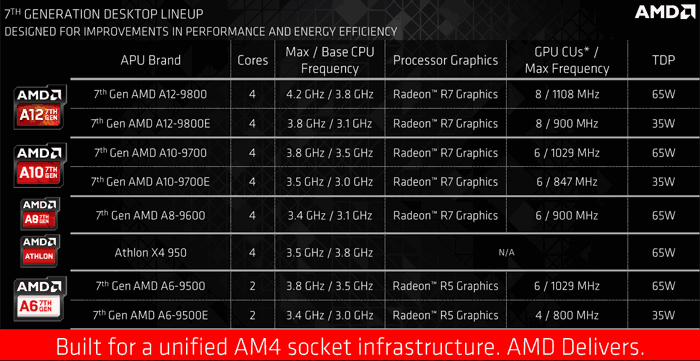 A complete solution to eliminate screen tearing without all the usual lag and latency for a more seamless viewing experience.6

Take your online gaming to the next level with stunning visuals and seamless gameplay on AMD A-Series Desktop APUs.

With the new DirectX® 12 API from Microsoft®, you get blazingly fast performance, higher frames per second, and reduced latency.

Generating less than one-tenth the noise of their predecessors, the new AMD thermal solutions are virtually silent. Look for them bundled with the new A10-7860K APU as well as the A8-7670K and A8-7650K APUs.9

The proven and powerful A10-7870K now comes with the new, near-silent 125W AMD Thermal Solution featuring the same capable hardware and performance of the Wraith Cooler, without the illuminated shroud.9

AMD A-Series APUs utilize the latest AMD Turbo Core technologies to optimize CPU and GPU performance in your latest applications, enabling up to 4.1GHz of CPU performance to deliver an amazing experience.

Get fantastic performance with GCN architecture

Immerse yourself in leading-edge graphics technology with Graphics Core Next (GCN) architecture from AMD. This third-generation technology enables advanced features and the stunning performance of AMD Radeon™ graphics.7

Raise your game with DirectX® 12, Vulkan™, and Mantle

The new AMD A-Series APUs support the latest graphics APIs to bring next-generation games to life. With support for these latest technologies in the latest AMD APUs, you can game at unprecedented levels of performance, with impressive effects and details.8

Revolutionary Heterogeneous System Architecture (HSA) is a new standard in processor design where the CPU and GPU work together in harmony. With HSA, the full potential of AMD hardware is enabled for more efficient performance, so applications are fast and responsive.